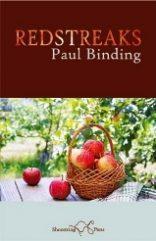 Poetry review – REDSTREAKS: Neil Fulwood considers Paul Binding’s chapbook to be deserving as much careful attention as a full collection

A Redstreak, just in case the above paragraph didn’t give it away, is an apple. And not just any apple, as the eponymous (and penultimate) poem makes clear:

But we’re approaching the end of the pamphlet at this point. Rewind. ‘Deep in the Heart of Texas’ begins the narrative with the hackneyed old country song (“yes, the band was still / pounding that out, dancers giving their idiot claps”) seeing in the New Year at a party that will prove as bittersweet as the apple for at least one attendee. I don’t propose to spell out the various characters or the nature of their rivalries – one of the pamphlet’s chief pleasures is its steady unravelling of these dynamics – but suffice it to say that Binding handles the material in a quietly ironic fashion that falls somewhere between the cosy banality of The Archers and the sweeping set-pieces of, say, an Iain Banks novel.

Archenfield is the setting for Redstreaks, a place name that could happily exist alongside the fictitious Ambridge of The Archers, as well as recalling Akenfield, Ronald Blythe’s fictionalised piece of social history. I’ll leave the Akenfield connection to anyone who wishes to pursue it: too many years have passed since I read the book for me to feel confident doling out any critical assumptions; and besides, Binding’s home is in the imprecise geographical Wales/Herefordshire hinterland known as The Marshes. Plus that’s where the apples that define the collection come from, anyway.

There’s something else I probably shouldn’t try to do in this review: gut the poems for the sake of pithy three- or four-line extracts. Only two of the eight poems are single pagers. The two longest occupy four pages apiece. These are poems that unfurl – sometimes lyrically, sometimes conversationally, one in the form of an email – at their own pace, to their own rules, and in their own damn time. That’s another of Redstreaks’ chief pleasures: Binding’s confidence that his readers will invest in a 21-page pamphlet the same slow, patient approach and appreciation of accumulated minutiae that a several-hundred-page sweeping novel would require.

So: a pamphlet mainly (and yet somehow only circumstantially) about apples, that exists in an aesthetic twilight zone where the signposts point variously to The Archers, Iain Banks, huge slabs of gothic melodramatic and, possibly, Akenfield. Believe me, I realise how this review sounds. And by this point I’ve either lost you entirely or you’re rushing out to buy a copy. I hope it’s the latter.