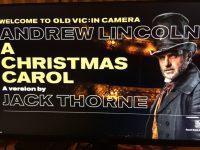 Every Christmas, London’s Old Vic delivers a production of Dickens’ A Christmas Carol.  This year is no exception – except that it comes to us via Zoom.

It’s impossible to shake off the sense that we’re living in hard times – with an orchestra wearing masks, actors who can never get too close and an atmosphere that falls short of the usual festive excitement.

Director Matthew Warchus himself refers to the Old Vic’s online shows as “emergency rations,” sustaining us until theatres can reopen their doors and provide the truly shared experience we crave.

We warm up with a quiz on Christmas traditions from around the world for an audience that is theoretically from everywhere and has a wealth of other Christmas Carols from which to choose, given that the perennial favourite seems to have reached peak popularity as the COVID-19 pandemic refuses to go away.

Jack Thorne’s lean adaptation checks the sentimentality and underlines the morality, appropriate to times in which we ought to be acutely aware of the consequences of selfishness.

Although we are not in the theatre, the performance is live and that alone generates drama and adrenaline on the part of the actors.

Andrew Lincoln, as Ebenezer Scrooge, bursts with a vigour that sees him by turns impatient with ghosts who deliver harsh truths, and, as soon as he has grasped them, impatient to reform.  We can believe he was once a charismatic youth with the potential to be far better than he has yet to become.  His miserly years are the aberration and we are given a hint of the psychological back story: the same terror of debt that drove his creator Dickens.

He has enthusiastic backup from the rest of the cast whose acting does its best to make a virtue of Zoom as the characters and ghosts of Scrooge’s past are arranged in frames that allow them to reach out to each other but never to touch.

Even allowing for the Christmas morning scene when Scrooge charges around an empty auditorium gathering up a feast for all the hungry stomachs that, we’re reminded, are still out there and for the cast’s admirable grasp of hand bell-ringing, the result cannot be as barnstorming as productions of Christmas past.

But the promise for the future is there and like so many of the brave, online offerings, the 2020 Old Vic Christmas Carol amounts to a pledge that, as the neon sign outside the closed theatre says, “We’ll Be Back”.