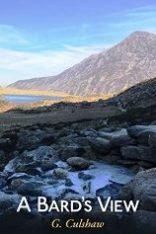 Poetry review – A BARD’S VIEW: PAT EDWARDS enjoys the moving simplicity and honesty in a new collection by G CULSHAW

To read this collection is to enter a very particular view of the world, and to be exposed to the most intimate thoughts of the poet. Culshaw’s style is unapologetically raw and breaks lots of conventions; this is one of its strengths. The poems amble like a walker exploring the past, remembering local characters, family and friends. They lead you through an urban landscape, out into the surrounding countryside, to marvel at the natural world.

One of the most striking things about Culshaw’s writing is his mastery of strange imagery that rocks the reader when you stumble upon it. In ‘Hide and Seek’ Culshaw describes being dressed to go out on a foggy night wearing “gloves inflated with hands.” This powerfully engages the reader, as does the idea of breathing out “slug-speed air.” With these unusual images, Culshaw brings mysterious times and places alive and transports us to the very edge of these experiences. Another fine example of this is in ‘Bike rides at night’:

Culshaw is fascinated by the local characters he encounters and has a playful knack of finding a peculiarity on which to focus. In ‘The dying farm’ he shows us how relentless work and weather grind down the farmer:

Although there are bright moments and a warm longing for the past, the writing is predominated by a pervasive melancholy. In ‘Passing trees’, Culshaw sees “old friends, like passing trees/their lives spreading maps and rings”, and “another has left behind a skeleton of himself,/having been and gone, life too short.” His poems about the natural world echo this longing and sorrow. In ‘Spirit of the Wood’, he presents “a foreign body to the wood and bark” as something whose “wings are oars rowing in the darkness.” This feels like a metaphor that runs through many of the poems, the creatures that don’t quite fit in, don’t belong. People like the drunk, the man haunted by the death of his father, the butcher, the fisherman, the gardener, the electrician; all men who have an inner life exposed for us by the poet. In ‘Gardening his future’, Culshaw hints at his own preference for the outdoor life over any office job:

As well as the great outdoors, another source of happiness and release is clearly football. Culshaw takes us to grounds and stands, smokey social clubs and on train journeys singing and chanting. There are kickabouts with mates, aiming at goals painted on walls, a “fist clenched when the Blues won.” The admiration for football legend Johan Cruyff is palpable in the poem of the same name, where Culshaw marvels at “his moves planned, five passes ahead.”

Culshaw’s poems look good on the page; he favours three and four line stanzas and, as I hinted in my introduction, is not drawn to experiment with form for the sake of it. Wonderful turns of phrase such as in ‘Barn Owl’, “her talons titter,/then wake like a thief’s hand in a glove”, and in ‘Llandanwg’, “I watch a wave vomit white/spider legs that crawl over the silence” are simply stunning. It is so refreshing to find a poet writing about the things he observes and the people he loves without any pretension. There is something deeply moving about the simplicity and honesty of this approach, that gives it an edge and a glint like light on a harsh Welsh landscape.