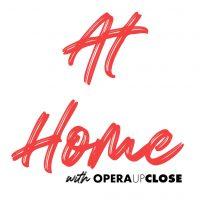 It was a celebration of the joy and collaboration enjoyed by teachers and students, as harpist Mary Reid tells us somewhat wistfully, given that she is a musician denied her usual community by lockdown.

It was also inspired by Ungar’s travels in Scotland and is in the style of a Scottish lament and a gentle waltz.  Reid, who is Scottish, delivers with great feeling her version for solo harp, providing the lyrical centre of this charming 30-minute concert that brings OperaUpClose to our computer screens.

Despite the challenges of being in their respective homes, Reid also accompanies with great precision soprano Sarah Minns with whom she has been working for around two years.

Not so much wistful as openly longing, Minns tells us that when she sang Barber’s “The desire for hermitage” in the early days of her collaboration with Reid, she could see beauty in isolation.  That was before weeks of lockdown reduced her to performing in her kitchen with a Laurel and Hardy poster as a backdrop.

The duo makes the very best of separation with a programme that spans Handel to Puccini via music from the late 20th century.

Minns shows her range in Emily Dickinson songs by Copland, though puzzingly tells us, there was only time for two of the cycle: time, you would have thought, was the one thing musicians have in abundant supply right now.

Maybe the constraint is Minns’ eagerness to embrace the part of Musetta from La Boheme.  La Boheme is an established part of the repertoire of OperaUpClose, which has been performing it for a decade as part of its vocation to make opera more accessible.

Musetta, as Minns tells us, is unsuited to social isolation and her song, designed to make her lover jealous, demands the audience for which Minns aches.