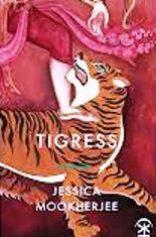 The comparisons are palpable. The unreality of England (“Toy-bright”) is anchored by the historical specificity of Churchill’s death: whether you think of him as statesman, stoic wartime leader or the man who, as Home Secretary, ordered troops to fire on striking workers at Tonypandy, Churchill remains a uniquely English archetype and the deliberate mention of him gives the poem its weight. The title, too, is deliberate – and ironic. The protagonist certainly doesn’t enjoy a gastronomic welcome, while almost familiar voices on the radio seem freighted with caution:

Much later in the collection, ‘The Displaced’ describes the kind of scene familiar from press reports drenched in hyperbole. Only here, the reportage is clear-sighted:

Whereas a press report would hammer home the word “immigration”, bemoan the drain on resources, Mookherjee’s imperative is humanitarian:

While a poem of this title and subject matter can only ever be political, explicit politicizing is generally absent from Tigress. It’s not so much a case of the personal replacing the global, or even of subtlety doing the work of the polemic; more that family, culture and memory consolidate into a far more effective poetic lexicon than the nakedly political or the poetry of protest. As a personal takeaway from the collection, given my own tendency to respond to the issues of the day with unsubtle and often heavy-handed protest poetry, Mookherjee’s work reminded me that I too often protest against rather than for.

Life left behind in India is contrasted with life in Wales, be it a “house where we loved but couldn’t touch” (‘The Welsh House’) or the lunar-haunted imagery of ‘Mumbles Pub Crawl’:

Mookherjee’s turns of phrase are exquisite: “mad / with the air” and “Something dressed as fiction” spark from the page to the reader’s imagination, igniting their own memories and experiences. Add to this roster “the sound of frostbite / and shouting, drenched in moon” (‘Moon’), “a violence of daylight / burning into all the things you told me” (‘Black Holes’), “the refinery at night, / where the lights made magic cities // against cobalt cloud” (‘The Engineer’), “an unused place inside me” (‘The Crone’), and “They spread / rumours that I’m the moon and chase me with silver”. I’m not going to contextualise any of these quotes or offer commentary of them; Tigress is a collection that deserves to be discovered, savoured, lingered over and returned to: a work, I believe, that will find its home in the subconscious rather than the coldly analytical.