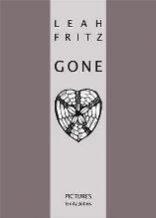 The title of Leah Fritz’s new pamphlet Gone seems to place it as a grimly humorous follow-up to a previous collection Going, Going...; and indeed this is a book very much concerned with mortality and memory. It begins with a recollection of the poet’s mother who ‘worked / at twelve, an immigrant, and studied hard…’ until eventually ‘… she’d dreamed this house and made it real / for us, my sister and I, born to steal.’

That same sister is commemorated in the next poem which recalls ‘a game when we were kids/ each trying to be the first asleep… somehow you always won.’ Many years later Fritz finds that, with the death of her sister, the pattern has repeated itself

After these two elegiac poems the central portion of the book moves away from the personal; but Fritz returns to contemplating the loss of someone very close in a final group of poems for her late husband, Howard. Rather than dwell on his absence, however, she chooses to write frankly but affectionately of his last illness at the end of their 62 year marriage. In a sonnet for their 60th anniversary she observes

There is remarkable craft here: that line break after ‘blows’ marks a shift from general to particular; and there are powerful resonances packed into that spare final line. In “The way things are” Fritz pushes honesty further than many poets would dare to:

Later in the poem more conventional tenderness returns as ‘I hold / out my hand, grateful I’m not there / alone’. There’s another artful line break between ‘there’ and ‘alone’ – but then Fritz cannot resist the temptation to press ahead and undercut the possibility of sentimentality as she tells us ‘I take my teeth out, my hearing aid and smile.’

“Endgame”, rather than looking back at a departed loved one, tackles the experience of anticipating bereavement: ‘We promised we’d leave together./ Fall out of a plane / holding hands…’ But a simultaneous departure is unlikely to be granted and inevitably

Again there is clever technique here and the full stop following ‘before’ (which might at first seem to be a mistake) succeeds in splitting off the surviving partner’s prolonged experience of waiting (suspended in white space) for an eventual end to their loneliness.

When she moves away from intensely personal subjects Fritz writes in a cooler more detached way and offers several longer poems, reflecting in on the lives and legacies of others. “Ozymandias defends himself” provides an interesting alternative take on the character from Shelley’s famous poem. This Ozymandias denies responsibility for the extravagant claims on the pedestal of his statue, saying he was ‘misquoted by a mad engraver’; and he maintains that the statue itself was ‘a bloated replica. It broke.’ He admits however to being tyrannical but ‘the multitudes would have me be that way.’ Not a very convincing defence perhaps, but his ultimate appeal for a kind of respectability is based on his presence ‘in a poem every schoolchild reads.’ Rather neatly, the next poem in the collection is a conceit imagining that Shelley survives the boating accident in which he was drowned.

Delving further into the past, Fritz uses a cinematic approach to re-tell the Biblical story of King David’s wife Michal. It begins

This poem – like the Ozymandias and Shelley ones already mentioned – is decorated with a striking full-page black and white illustration by Emily Johns.

Different again from these narrative, character-based poems is a meditative piece “Reflections on lines from poems by Ts Eliot”. This catches rather well the tone of parts of Eliot’s Four Quartets: but Fritz is careful to make clear that she certainly does not start from the same position of faith as Eliot

Fritz’s dry assessment of the psychoanalytical process surfaces later in the poem : ‘… just when you thought you were about / to see … The hour’s over. You are out.’

“Commencement” is in fact a well made sestina which, along with the half dozen or so rhymed and unrhymed sonnets, reminds us that Fritz has always been adept at formal poetry. Her inventiveness with rhyme is displayed in, for instance, the pairing of ‘garden’ with ‘hard and’ or ‘fake it’ with ‘fuck it’. She draws attention to her own artfulness in an elegy for the poet Michael Donaghy

Like Donaghy (and like TS Eliot for that matter) Leah Fritz is an American who has made London her home and who has become a significant figure on the London poetry scene. This latest slim volume – beautifully produced by Hearing Eye – is one more reminder of her considerable skills.