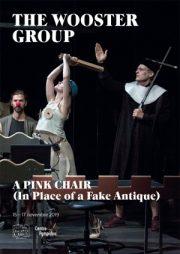 Inspired by the works of Tadeusz Kantor. Commissioned by the Adam Mickiewicz Institute for the Festival d’Automne.

I saw Kantor’s extraordinary and original creations at London’s Riverside Studios during the 1980s.  His fusion of Catholic and Jewish history, evocations of war, agony, dreams and terror, remain seared in my brain.  Kantor’s vision emerges from a history of Nazi Occupation and the oppression of the Catholic Church.  It is utterly rooted in the textual and visual languages of Polish culture.

The Wooster Group, performing in American English with French surtitles, extrapolate the essence of Kantor’s iconography and imagination in isolated fragments on screen and onstage.  One actor plays ‘Kantor’.  The rest of the team imitate key moments from the most famous of Kantor’s inventions.  This is museum theatre.

A Pink Chair was created by the director Elizabeth LeComte in consultation with Kantor’s daughter Dorota Krakowska.  That Kantor’s daughter is involved gives this spectacle the imprint of authenticity.  However, A Pink Chair is a catalogue of disconnected scenes, which, out of context, have little meaning for the uninitiated or those with a memory Kantor’s vivid dramas.  Despite good intentions this production is merely a pale shadow of Kantor’s brilliance.  Certainly, the Wooster Group is multi-talented and the performers are totally invested.  It is evident that A Pink Chair wishes to honour Kantor to celebrate the 100th year of his birth, sadly this well-meaning happening merely shows the outer crust of what is a multi-layered, complex and mystical world.

The problem is that, as the French say, traduction est trahison.  It is impossible to reveal the mystery of Kantor’s genius in American English.  Language transmits a cultural atmosphere and a historical memory through the music of speech and the breath that nourishes creative invention.  A Pink Chair may be useful to explore Kantor’s theatre practice in an academic environment, such as Bard College where this production premiered, but in Paris, it is aesthetically awkward.  When the ensemble comes together in a final choral hymn we experience an American semi-evangelical epiphany rather than a transcendent moment of Polish history.