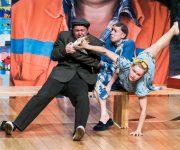 I go to Russian theatre for the performances of actors whose skills are extraordinary.  Theatre of Nations’ double bill did not disappoint. There is something in the Russian training and performance that hits the back of the skull.

Shukshin’s Stories is a series of partly dramatised vignettes inspired by the novellas of Siberian author Vasily Shukshin (1929-1974).  Set in the 1970s, these focus on village life and are praised in Russia for depicting ‘ordinary people’.  This is a celebration of the rural as opposed to the Russian urban intelligentsia.  According to the programme, Shushkin is celebrated for his depiction of ‘Russianness’.  Mostly these dramatised prose fragment come over as folksy, winsome and naïve – perhaps this is how Shukshin escaped censorship, but the amazing design, by Monica Pormale, and the vigour and daring of Alvis Hermanis’ production, rescues this oversweet mélange.  Just.

More interesting is the updated version of Ivanov directed by Timofey Kulyabin.  Projecting Chekhov’s 1897 comic drama in to the late twentieth century, Kulyabin shows us how advanced a thinker Chekhov was.  The anti-hero Ivanov sleepwalks through a life of debt where he gravitates towards women who can save him from penury.  His marriage to Anna, also known as Sarah, is collapsing as he has fallen out of love with his dying, Jewish wife.  Ivanov is already preparing her replacement, Sasha, the daughter of a wealthy friend.

The character of Ivanov raises all sorts of questions.  Why was this feckless, faithless and debt-ridden character so attractive to women?  His first wife abandons her Jewish family to be with him: Sasha, who is young enough to be his daughter, throws herself at him.

Chekhov’s awareness of patriarchy and the dearth of choices offered to women in Tsarist Russia but when the play is transposed into the twentieth century, does this mean that women in Russia still see ‘love’ as their primary work?  Chekhov says it.  Do we believe that?

Performances by Evgeny Mionov as an ageing lothario who has a strong dose of self-hatred, Chulpan Verzhbitsky as the long-suffering Jewish wife (is this perhaps where Chekhov creates a one-dimensional Jewish Russian?) and Elizaveta Boryarskaya as the putative second wife, are terrific.  The rest of the ensemble is equally as thrilling.

This fascinating production of Ivanov stays in the mind as a difficult and troubling work that has disturbing resonances.  As for Shukshin, perhaps the stories are better left on the page.  Even great acting cannot eradicate their anodyne narratives.  In the 21st century it might be more egalitarian to find a contemporary woman playwright to balance the great male  authors of the nineteenth.