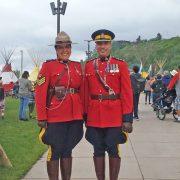 On 1st July, Canada Day, I was up and ready since early morning wearing a red T-shirt and red cowboy hat.  I had planned my tour of the city in advance with the help of the lady of the tourist office.  Prince’s Island was my first stop.  Then I wished to visit some places in town that had free entrance on the day, such as Studio Bell, Fort Calgary, maybe the Glenbow Museum if I had time and enough energy.

It was a glorious sunny day.  Everybody was out dressed in red, moving from one place to the other.  At Prince’s Island you learned how to wrap a red Indian turban around your head and could have a photo with it.  The stall of the French community gave information about their schools and cultural heritage and the area dedicated to Indigenous peoples displayed various interactive activities.  First Nations had a large stage where speeches and videos were delivered; tepees were displayed in a circle where you met Indigenous peoples and talked about their culture.  Market stalls sold their impressive wares, colourful and appealing.  Being a shopaholic, I couldn’t help but buy, thinking about all the little presents I wished to give to friends and family in Italy.  I bought jewellery and cards with replicas of enchanting Indigenous paintings evoking their myths and legends in striking colours.

The atmosphere was exciting, music was everywhere.  I mixed in the cheerful crowd, had a ‘free hug’ from a guy and a girl that where there just for it, then walked to Fort Calgary along the banks of the Bow river.  The site was packed with people having picnics, dancing, singing or simply enjoying the sunny day.  I had a photo with a well built lady in the red uniform of the Mounties, the North West mounted Police that used to control the area.  The Fort is a long two-storey edifice that looks like a residential house rather than a fortress as it has no walls or towers.  It was built in 1875 at the confluence of the two rivers in the Blackfoot territory.  It became the centre of the community of settlers that grew around it and eventually founded the city of Calgary.  Outside there is the bronze equestrian statue of Colonel James McLeod.  Inside, it is a museum that recreates the settings of life in the Fort.  The construction of the Pacific Railway had a fundamental importance at the time and the Treaty 7 McLeod signed with the Blackfoot leaders obtained the rights of the land where the fort and the city of Calgary were built.  In exchange, the Indigenous peoples had food, clothing and money but they probably were not aware of what they were signing.  For the Canadian government it was a purchase but for the First Nations the land could not belong to anyone.  For them, people belong to the land instead.  This was one of the main points where the Western European mentality clashed with the Indigenous peoples’ ideas.  Europeans settlers considered the land a free resource to fill and exploit while the Natives considered themselves in relation with the environment, which was not only the land but also the trees, animals and rocks.  They were not familiar with the idea of using the resources and accumulating the profits but rather stressed the concepts of sharing and respecting the natural world.  Because of these gaps in communication, the relationship between the Indigenous peoples and the European settlers had often been problematic at the expenses of the weakest, that is, the Natives, who were often dispossessed of their lands and deprived of food resources.

I could not miss the Central Library on Canada Day where story-telling and sin along sessions went on during the day.  Outside the library, you could stencil a maple leaf on a ‘My Canada’ sheet of paper.  On the west side of the library, 4th street, children played hopscotch and young people had a few throws at basketball.  Across the road, the impressive ultramodern edifice of Studio Bell, the National Music Centre, was another must to visit.  It is a music museum that traces the history of Canadian music from barn dance and country music to Indigenous, pop and rock singers.  Instruments and costumes of popular singers are on display as well as the devices to produce sound effects.  There are also spaces for workshops, concerts and exhibitions, though on Canada Day it was just packed with visitors.  I spent some time in the country music area watching barn dance videos in a cosy hut, looking at people walking up and down dressed in red with funny hats and dangling accessories.  They stopped for a while maybe attempted a few steps then walked away.  In the pop songs area, I discovered Corey Hart’s music: ‘Sunglasses at Night’, ‘Never Surrender’, ‘Can’t Help Falling in Love’.  I had a sort of obsession with his songs during my Canadian holidays.

Then the Stampede started and lasted for two weeks.  It was an electrifying experience.  I booked for the Rodeo, the Chuckwagon Races, and the Grand Stand show, Trailblazer, which ended with the fireworks.  It was exciting just walking up and down the area where huge food stands displayed all kinds of high calories stuff and live music went on the whole day.  There was a parade as well with a brass band and flag dancing.  Everybody wore cowboy hats; I bought one as well together with a pair of boots and dressed up as a cow girl for the events.  Funfair with all kinds of attractions took a good part of the areas and there was also a space dedicated to Indigenous culture with market stalls and tepees.  Interesting displays on farming and ranching showed horses, goats, sheep, ponies and pigs as well as Canadian products, such as Canola oil, which is produced from the seeds of a yellow flower.  It is ideal for stir-frying and deep-frying as well as for baking as it is lighter than butter or olive oil.

Attending the rodeo shows and the Chuckwagon races was incredible.  All events started with the national anthem and flags flapping around the arena held by horsemen.  Then I felt immersed in the cowboy atmosphere, chatted with the people sitting beside me about who was going to win, cheered and took photos and videos.  Besides the traditional bareback riding, tie-down roping and steer wrestling, there was also the ladies barrel racing, the pony race for children and Indigenous dances.  The winners of the main competitions won good money: $ 5,500.  The Chuckwagon races were breath-taking and lasted for a while.  At the end, there was the exciting Indian Relay performed by Indigenous peoples.  It was quick but incredibly gripping.  The Grand Stand show followed with songs, dances and circus performances.  Sky-high fireworks closed the night and I found my way home in the lively crowd that was wandering around the Stampede park buying food and drinks and taking rides at the Funfair.  ‘Good job’, said the speaker ‘and good night.’

Shukshin’s Stories & Ivanov. Review by Julia Pascal. #4 Experiencing Canada; Out and about. By Carla Scarano.