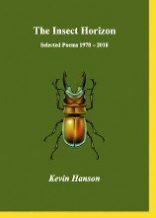 I was halfway through The Nazis: A Warning from History, the six-part film written and directed by Laurence Rees for the BBC in 1997 when Nicholas Bielby showed me a copy of Kevin Hanson’s The Insect Horizon. This book, a compilation from six pamphlets of poems over the past twelve or thirteen years, did not seem out of place alongside Rees’ masterly work. Both shun sensationalism. Rees depicts wickedness in human terms and so does Hanson who was born and raised a Roman Catholic. Rees asks the pertinent question: How did this happen in the heartland of civilised Western Europe in the twentieth century? Hanson too is preoccupied with what it means to be human with a feeling for the metaphysical surrounded by memories and images of horror.

A woman is questioned about Reinhard Heydrich, the cultivated, violin-playing Nazi who master-minded Hitler’s Final Solution . She tells Rees that he was “sweet”, “charming”. When she asked him about the murder of Jews he told her “not to bother about that”. “What does ‘human nature’ mean, after all?” Hanson asks in his poem about Amon Goeth, the Austrian SS man responsible for Plaszow concentration camp in German-occupied Poland. The warning from history, as the anti-Nazi philosopher Karl Jaspers put it after the war, has not been heeded. Less than forty years later hundreds of civilian refugees were systematically slaughtered by a Christian militia group in Lebanon.

‘Chatila’, one of Hanson’s 14-line poems (his best pieces are succinct), begins with questions about the nature of God. It concludes:-

Hanson’s endings are usually stronger than his beginnings. Here are some examples of his concluding lines: “but love will shore us up until Death stands/ in the fireplace of our marriage with his black sack”; “I prefer France’s historical machine/ For making bacon: Madame Guillotine”; “He died like a dog for this civility”. This not to say that his endings outstrip his beginnings in every case, of course; but I like the way a poem might start off like a drone hovering above a landscape but the pay-off is a stinger missile. The six-verse ‘Puma’ begins with the image “the puss on your sofa”, transitions to a big cat in the wild and ends:

Kevin Hanson is not one of the acknowledged big beasts of contemporary British poetry. And writing about God, war and the universe does not usually confer big-beast status on little-known poets either. Why it is that some become big cats, purring along the boulevards of fame and fortune, while others remain alley cats is itself worthy of a Hanson poem. (Or perhaps one by Nicholas Bielby, another well-attuned voice in the wilderness who attends literary festivals instead of being asked to read at them.) Hanson is one of many good poets published by Bielby during the fifteen years that he edited (and made financially solvent) the poetry magazine Pennine Platform and merits a bigger audience for his best work.

Who, for example, could fail to be touched by ‘One Night in Dingle’, a beautiful piece of just a dozen lines about Amy Winehouse:

Which of the gong-winning big cats – Simon Armitage, Carol Anne Duffy, Don Paterson – could do it better than that? Paul Summers probably could from what I have seen in his volume The Last Bus; but he, like many other original writers, remains out in the cold. ‘One Night in Dingle’, like another poem, ‘Chimpanzee’, (“What does it mean for us to infantilize/ the cousin most like our murderous selves?”) strikes me as perfect. The subject is placed directly before the reader but without the ruminations of the writer to get in the way. That takes judgement, discipline and not a little skill.

The book also contains poems about birds, childhood and domestic things which, I must confess, were less interesting to me. While Hanson’s poems about cancer and surgery are strong and must have been therapeutic to work on, I thought there were one or two too many. A little trimming from 109 pages to 90, say, would have made the volume stronger.

Mixing everything up together – the good, the fearful and the quotidian (to use a Smith|Doorstep word) – meant that at times I flicked through the pages to get on with it. But Kevin Hanson’s best deserves wider attention. ‘One Night in Dingle’ and ‘Chimpanzee’, for example, should be part of the National Curriculum. But I suspect he is the wrong age (over seventy), wrong sex with the wrong social status. However, it would be nice to be proved wrong.