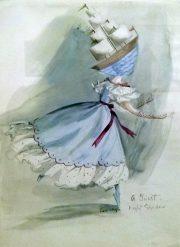 Surrealism was the driving force that motivated Dorothea Tanning’s career from the 1930s until her death in New York in 2012.  It offered her an alternative world that she explored going beyond everyday reality.  She adopted different kinds of media, mainly oil painting but also graphite, collage, lithograph, engraving, watercolours, fabric and wool installations and soft sculptures that testify her versatility and boundless creativity.  The exhibition moves chronologically focusing on specific themes and on the development of her artistic and intellectual skills.  In the last room, a documentary film of the mid-1970s, filmed by Peter Schanoni in her home in Seillans (France), shows her studio and reveals her personality as a woman artist engaged in one of the major artistic movement of the twentieth century.

Going ‘above realism’ was the main aim of Surrealism which was inspired by the Freudian theory of the unconscious in an attempt to merge dream and reality in a surreality that expressed better the human desires.  According to André Breton, the founder of the movement and its leader from the start in 1917 until his death in 1966, the artist is a visionary that revolts against the ordinariness of society discovering the unknown and the beautiful.  This can be found in unexpected encounters, in images that challenge the status quo and propose alternative visions.  As Arthur Rimbaud said for poetry, it was a ‘derangement of all the senses’.  Surrealism hoped for a transformation of thinking and living that removed the barriers between reality and imagination freeing the unconscious, which was considered the ‘real’ expression of being.  The uncanny is one of the central recurrent themes in the manifestation of the extraordinary in everyday life.  Familiar things can become strange and prompt unexpected feelings in the juxtaposition of contrasting objects or images in a free association that pushes the boundaries of ordinariness.  Surrealism was also a reaction to the horrors and deaths of the first world war, a sort of escapism in a dream world that was still a source of life and hope.

Dreams were the main fount of inspiration and were expressed in painting through automatism, that reflected automatic writing, that is, a free way of writing without thinking or stopping, through the pictorial techniques of frottage (rubbing) and grattage (scrapping), and collaborative drawing.  Love and eroticism were widely explored in ambiguous pieces in which women are seen as the origin of love but also as devouring mantes.  Proto-surrealists were identified in Renaissance painters such as Giuseppe Arcimboldo and Hieronymus Bosch and in the metaphysical painter Giorgio de Chirico.  The movement expanded all over Europe and in America influencing not only literature and visual art but also cinema and fashion designers, such as Elsa Schiapparelli who collaborated with Salvador Dalí in her creations.

According to Breton, beauty is ‘convulsive’ (‘La beauté sera CONVULSIVE ou ne sera pas’, beauty will be convulsive or not at all), that is, uncontrollable and shocking, as he wrote at the end of his novel Nadja, an experience that disturbed and excited at the same time.  It was expressed in the photographs of Dora Maar and Man Ray and in the works of two of the major painters connected to the movement: Salvador Dalí and René Magritte.  They systematically questioned reality through visionary and, in Dalí, hallucinatory creations that provoke and subvert our perception of everyday life.

Dorothea Tanning’s work represents the development of the surrealist movement with sensitivity and originality.  She worked in an international context that brought her in the heart of the movement in New York and Paris.  The exhibition clearly displays this development showing how the different phases of her career smoothly interweave in a continuous artistic expression in which the liberation of the imagination was as important as the mastery of pictorial techniques.  She had the opportunity to meet and work with the most important artists of her time and married one of them, Max Ernst, and also worked in solitude in Arizona where she and her husband built a wooden house.

As most of the surrealist artists, her work deals with unconscious desires, love and eroticism, which are subtly depicted.  They are a source of pleasure and fear at the same time, enjoyable and frightful.  Unexpected juxtapositions allow the viewer different interpretations, open to different views as Tanning herself was not sure or was unaware of the signification of her work.  Her style, mainly figurative especially in the oil paintings, reminds of Magritte’s ‘quiet subversion’ rather than Dalí’s provocations.  Her work is not improvised as in automatic painting, but is thoughtful and well crafted implying a process of opening of the imagination to the outside world, a transformation of the real into the surreal.  Her young girls at the verge of puberty (‘The Magic Flower Game’, 1941) are covered with flowers or refer to flowers, as in the famous painting ‘Eine Kleine Nachtmusic’ (a little night music, 1943) in which a gigantic sunflower seems to suggest the blossoming of the awakening desires of the half naked little girls ironically and light-heartedly commented by the title that refers to the famous piece by Mozart.  A similar ironic and humorous comment is implied in ‘’Children’s Games’ (1942) in which young girls strip off wall paper revealing disturbing unidentified images behind it.  The connection with the short story by Charlotte Perkins Gilman ‘The Yellow Wall-paper’ is inevitable also revealing Gothic romance influences testified in other paintings, such as ‘A Mrs.  Radcliffe called today’ (1944) and ‘The Guest Room’ (1950-52).  The uncanny is evoked in monster-like figures and juxtaposed to a familiar setting.  The unfamiliar creeps in in a humorous rather than threatening way, which is also revealed in her production of the soft fabric sculptures later on in her career.  The ‘Hôtel du Pavot, Chambre 202’ (1970-73) is an installation in which soft sculptures of monsters and body parts break through the wall paper and combine with furniture in an unsettling, absurd but also amusing way.  Nevertheless, the references are multiple as pavot is French for poppy and links with opium and hallucination, and the room number refers to the story of Kitty Kane who committed suicide in room 202 in a Chicago hotel.  Therefore, the yellow wall paper is symbolically transformed from a prison into a fount of creativity that unleashes powerful images.

Other interesting phases of Tanning’s career are explored in the exhibition, such as her prismatic more abstract style of the mid-1950s in which her pictures reveal a looser technique with kaleidoscopic brighter colours; the texture is softer and dismembered body parts merge with abstract shapes.  She was also a freelance illustrator and a poet and worked for the theatre producing costumes and backdrops for the choreographer George Balanchine.

The documentary film appropriately closes the exhibition showing the artist in her studio accurately painting her pictures wearing a bib apron with her finger nails painted red, made-up and coiffed like an ordinary housewife who is welcoming her neighbours for tea.  She speaks of her art in front of a mirror saying that we are prisoners of our events and cannot escape biography and that behind a door she has always found another door to open in an endless discovery of new challenges and goals.  She says she cannot explain her pictures, she can only produce them and deliver or promote her work to the public.  She seems an artist in incognito.  In her way, she personifies the essence of Surrealism merging dreams and reality in an ‘absolute reality’ that cannot avoid ordinariness. 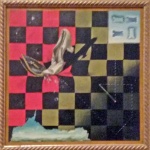