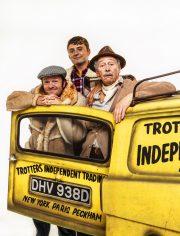 Only Fools and Horses, the musical

Five hundred years ago, Peckham was green and pleasant. By the 1980s and 1990s, when two of its most famous fictional characters Del Boy and Rodney Trotter were plying their dodgy wares, even the pigeons wanted to be elsewhere, or so Rodney tells us.

Now you need to be one of the millionaires the Trotters dreamed of becoming to afford Peckham’s property prices, raising the question: where have all the cockneys gone?

As the London bubble becomes ever more exclusive, it’s a question that resonates in our BREXIT-troubled times, making this the moment to deliver what co-writer Jim Sullivan, son of the late John Sullivan, the creator of Only Fools and Horses, describes as an act of homage.

As a tribute, it recognises its limitations. The wafer-thin plot and light musical texture do not aspire to match the content of the 64-episode run of Only Fools and Horses.

But, like the original, which at one point in 1996 captured a record-breaking audience of more than 24 million viewers, it responds to an enduring appetite deep in some sections of the British public for characters who are loveable failures that they like to believe can succeed: if they had their chance on the London stage, they would make the grade.

For the space of an evening of West End nostalgic fun, we’re back in a contained community, where family counts for everything and bending the rules to get by never leads to anything more serious than a few broken bones.

The one-liners are the work of highly professional comic writing, delivered with great naturalness by Del Boy, who is played with swagger, warmth and hints of pathos by Tom Bennett, and by Ryan Hutton as the put-upon Rodney.

For the most part, the jokes are more mainstream than edgy and daring, but they’re not devoid of depth.

I particularly enjoyed the bickering between Grandad (charmingly performed by co-writer Paul Whitehouse) and Rodney and Del Boy. They are all expert at doing each other’s heads in and they trade blame and emotional blackmail: Rodney is fed up of being the downtrodden slave, Grandad is sick of being ignored, and Del Boy could have been “something” if only he’d put his little brother into care instead of bringing him up. In their affectionately-insulting ways, they are devoted to each other.

As grandad ponders his limited remaining time, the brothers battle with their “sort-of” feelings and the quest for romantic satisfaction with the eligible Cassandra (Pippa Duffy) and the kindly Raquel (Dianne Pilkington).

By way of subplot, Marlene (Samantha Seager) and her pompous freemason man Boycie (Jeff Nicholson) are struggling to conceive. It may not be quite ground-breaking, but we’re still only in the infancy, so to speak, of tackling infertility as subject matter for a musical.

The sperm-shaped fireworks that light up the sky above Liz Ascroft’s believable set are a fine visual joke and the seedless “jaffa” verbal joke verges on the genuinely offensive, only forgiveable in the everyone-is-family community of Only Fools and Horses Peckham.

The punters at the Haymarket roared for more. John Sullivan, whose own story was a rags-to-riches rise from poor, working class roots, via the back stage of the BBC to a man who entertained millions and continues to do so, would surely be content.