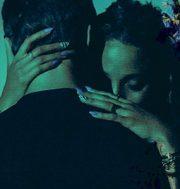 Just as Keats’ elliptic “Beauty is truth, truth beauty” is comprehensible in context, the meaning of Che Walker’s “Time is Love/Tiempo es Amor” is made apparent by this superbly acted and eloquent 90 minutes of drama.

And just as Keats drew on the classical world and reinvented it, Walker’s mix of languages and media is entirely derivative, packed with clichés, and yet strikingly new.

In other hands, the combination of Spanish and English, theatre and a cinematic backdrop might be merely bewildering.  Under Walker’s direction, six actors, muscular in the fullest sense, draw us into their idiom.  Sometimes it’s hilarious.  Sometimes it borders on the ridiculous, but mostly it’s tense and dramatic.

The time is now and we know from the start that now is the time of catastrophe, which feels especially contemporary as we face the volatility of angry populist politics and a national sense of betrayal.

To understand “now”, we’re taken back three years to the beginning of the ongoing lies and infidelities that in a Los Angeles criminal underground setting, combining street smart with the aggression of a pitbull, are unlikely to end well.

The central story is that of Blaz, played by Gabriel Akuwudike, and Havana (Jessica Ledon).  The chemistry between the pair is explosive.  He is taciturn and menacing, yet also tender and agile – not least when he amazes us with his skipping skills.  She is charming, sensual and expert in emotional argument.  That ought to be enough.

Unfortunately, temptation is all around.  Benjamin Cawley as Karl is the jealous friend, who like an alcoholic unable to bear anyone sober, won’t allow his partner in crime to go straight.

Then there is Rosa, played by the sculpted Sheila Atim, the not-quite-trustworthy best friend of Havana, and Cary Crankson as Seamus, the completely untrustworthy cop.

Sasha Frost transforms herself with a wig into Serena the sex worker.  Her acting is of a piece with the general excellence but the part feels less than essential and if the play concluded with the very visual moment of dramatic suspension a few minutes before it actually ends, Time is Love/Tiempo es Amor could be even better than it already is.