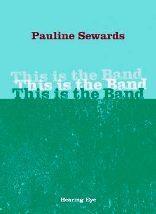 The title – like quite a few of the poems in this collection – seems to reflect the way that the music of one’s youth can stick in the mind and the memory throughout life. ‘Click-clack your fingers and you’re back in The Glider’ – a Lincolnshire dancehall – where ‘This is a Night. / Full on and getting louder… tonight we are gasp and glamour.’ “St Whenever” tells of growing up ‘in the urban village / divided from the city by the motorway’ which was amply furnished with local entertainments so that, when planning a night out, ‘the whole caboodle began and ended at the Vic’ where, intriguingly, ‘human jukeboxes told the same old stories.’

Sometimes an element of fantasy creeps in to the musical recollections:

And did Jimi Hendrix really turn up at a local Bring and Buy sale with ‘the air of a time traveller / silver splashes on his cowboy boots, a teal green velveteen jacket’? Was he really to be seen ‘playing / the vicar’s guitar, with his teeth’? One also wonders whether “the band who sleep at my house” is made up of ghosts from the past or whether this is a visiting group of real, young, musicians ‘pushing the envelope of indie with / loud / ripping vocal chords and vintage shirts.’ (And is that wordplay on vocal chords/cords intentional?)

But for all the verve and vividness in these music-related poems I do feel that the book comes more fully into its own when it tackles political themes. There is quite an abrupt change of tone when, a few pages in, we encounter the poem “Family and private life immigration rule changes 9 July 2012”.

The matter-of-factness here contrasts with the lively mood of reminiscence: but the blunt observation is immediately paraphrased into ‘Hearts become coins become cherries / in a fruit machine. There are no / winning lines …’ Similar bluntness – even bleakness – occurs without any softening in “Brexit town” which speaks of anti-immigrant graffiti and records

That ‘staggering’ is a good word choice. And “Definitions” which comes next is all about word-choice, being a kind of list-poem based around the words austere and austerity. For instance

This powerful – but perhaps slightly-too-easy? – generalisation is soon followed by a more specific story of Isobel, an office cleaner, who had to wait nine years to get her residence permit. When it finally came through

And Sewards puts her finger with painful accuracy on why the well-meaning whip-round didn’t quite match expectations:

It is not so surprising that, as well as isobel, we also meet Geraldine who ‘came over on the Windrush’. Her story is not a happy one but this is not due to harassment by the Home Office buty largely because ‘she’s been a widow far longer than a wife’. She ‘talks about Jamaica as if she still lives there’ and is increasingly impatient with her neighbour’s ‘knee-jerk English sorrys’. A more surprising item, however, is “Betrayal” which is about undercover police infiltrating “subversive” organisations (like anti-war or animal rights groups) using assumed identities stolen from long dead children. This is not a subject I have previously seen being tackled in a poem.

Other poems in this pretty varied collection draw upon Sewards’ experience working in health care: the art of taking blood samples is another subject that I have seldom seen used as a theme for poetry. There are also recollections of real or imagined childhoods often involving food:

Poignantly, in the aftermath of a World War, a child observes that

In “The Only Child Club”, the poet’s reflections suggest that she herself is a member:

Two further poems which stand out for me relate to the cusp between childhood and growing up. Both deal with teenagers doing summer work in seaside towns. In “Holiday job”, the narrator wears the uniform of a beach photography company and ‘like red and yellow wasps we buzzed along the seafront.’ She manages to make a living even though ‘light often leaked into the backs of our cameras / turning skies green like a freak storm.’ Ice-cream selling is the holiday job in the much darker poem “Groom” whose title reflects the opportunities that exist for exploitation of a sixteen year old

The poetic styles employed in this collection are as diverse as the subjects explored. Sewards’ free verse is shaped using both long and short lines; sometimes it appears as regular stanzas and elsewhere it is presented in solid blocks that amount to prose-poems. Inevitably some pieces are more successful than others, but in terms of both form and content this collection has a consistent freshness which encourages the reader to expect a new surprise with each turning of a page.