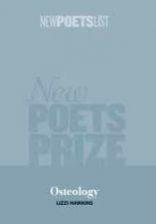 Lizzi Hawkins combines studying engineering at Cambridge University with being a prize-winning poet. Born in 1995, she won the Poetry Business New Poets Prize in 2017, having been commended in the 2013 Foyle Young Poets of the Year award. Her poetry has appeared in Ambit, Rialto, The North, Compass and The Cadaverine. and here she is on smith|doorstop’s New Poets List with her first pamphlet, Osteology (2018).

In just 28 pages, she takes us from Cambridge spires and West Yorkshire peaks to London’s tunnels in an impressive sweep that often takes time to notice people in their work context, whether they are engineers, builders, geologists, medical students or an ‘old school’ geographer –

“Train” captures the rootlessness of student life, never fully in one place or the other –

Hawkins’ poems often begin in conversational style before she weaves her way through lyrical beauty to a killer last line. “Winter Poem”, for example, starts ‘The fens were frozen clean over this morning, /from the millpond out to the causeway’. Before long, she stretches into Cambridge’s snowscape –

In “Constellations”, Hawkins and her father go out to the patio where he ‘deciphers the sky for (her)’: ‘It’s not often that the sky is clear / round here’. They pass the names of constellations ‘to each other like sweets’ until the poem closes with these lines –

Hawkins’ mother has a moment of perfectly paced tenderness too, one that echoes Heaney’s sonnet (from Clearances, in memoriam M.K.H.) that begins ‘When all the others were away at Mass’. In Hawkins’ poem “After the Forecast”, the family is snowbound –

Hawkins has an engaging way of lifting our gaze from practicalities into the mirror tunnel of eternity. “Calcium”, for example, she says, ‘is the twentieth element in the periodic table,’ and finishes:

This is a beautifully textured pamphlet of accessible poems. Well done, Lizzi Hawkins – I hope you and Ilkley Young Writers are still celebrating.

Rosie Johnston‘s three poetry books, published by Lapwing Publications in Belfast, are Sweet Seventeens (2010), Orion (2012) and Bittersweet Seventeens (2014). Her poems have appeared or featured in Hedgerow, London Grip, Culture NI, FourxFour, The Honest Ulsterman, Ink, Sweat & Tears and in Live Canon’s anthologies ‘154: In Response to Shakespeare’s Sonnets’ (2016) & ‘New Poems for Christmas’ (2018).  She has read her poetry widely and between 2014 and 2018 was poet in residence for the Cambridgeshire Wildlife Trust, until she moved to live by the sea in Kent. www.rosiejohnstonwrites.com @RosieJpoet