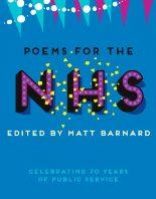 How lucky we are to have our National Health Service. However much we don’t want to think about what goes on in hospitals (more of that later!), we are profoundly relieved that they are there, and that we don’t live in the Third World. Many of the contributors to this volume are eager to express their thanks. ‘Without the NHS, she would not be here’, writes Joanne Limburg of herself, and Fiona Ritchie Walker, whose grandfather remembered the old days, notes:

Yet the book isn’t all about celebration. Most of these poets are, or have been patients, or are mourning the death of someone close to them. A few work for the NHS, like Roy Marshall, whose “Student” describes his part in preparing corpses. There is one political poem, “Picket Line, April 2016”, by Hannah Stone, in which we are surprised to see junior doctors with ‘scarves not stethoscopes’ round their necks. Not much is said about the financial pressures on the service or the fact that ambulance crews are regularly attacked.

One poem, “Ultrasound”, is joyful. Ali Thurm has had three children in her local hospital and is awed by ‘the mystery of seeing inside my own body and the anticipation of imagining what kinds of people these unknown babies will turn out to be’:

The metaphor isn’t about actually believing in a horoscope; it’s about mystery.

But many other poems are very dark. While paying tribute over and over again to those who work in the health service, several writers have grappled with death inside a hospital and are not at all sure that they will survive. I was particularly impressed by Alexander Hamilton’s “Dancing with a Crab”:

Another who has struggled with the Crab is Gordon Meade, as described in “Reflections of the Man in the Iron Mask”:

And Rachel Burns winces as a nurse injects ‘nuclear venom into my veins’. No, we would all much rather not be in hospital.

The quality varies, of course, but there are so many powerful voices here: Wendy French, Owen Gallagher, Lucy Hamilton, Thomas McColl, Gill McEvoy, Lucy Newlyn, Carole Satyamurti, Myra Schneider, Penelope Shuttle (‘the dead are writing on the ceiling/but the surgeons don’t look up’), Angela Topping. Ruth Valentine, in “Long-Term Prognosis” is perhaps the poet who best expresses the paradox about hospitals. They make us well, they give us hope, but they are also the place where most of us go to die:

Larkin had things to say on the same subject. I must force myself to re-read him.