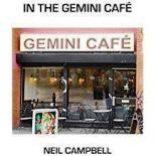 In the Gemini Cafe

Charlie Hill appreciates the ‘dry, intimate and unexpected’ writing to be found in Neil Campbell’s collection

On the evidence of this collection, three of Neil Campbell’s preoccupations as a poet are work, nature and the sort of existential strain to be found in rented rooms soundtracked by ‘the deep muted sounds of the bathroom fans as the solitary men get up to piss in the night.’ His approach is sometimes robust, sometimes delicate, sometimes both.

On work he is as unforgiving as work itself. ‘Fantastic Opportunity’ includes the line ‘God knows I’ve done shit jobs before/but never with a contract like this’, which is as direct as you sometimes need to be. But there’s more to him than the unvarnished truth, particularly when he talks of immersing himself in the natural world. Occasionally this provides a complete release. In ‘Goldfinch in Tow House’:

Perhaps more often it is a consolation, squarely and affectingly placed within the context of the degradations of the everyday. In ‘A Vision of Herons’ he writes: ‘…Finally/I was off the 9-5 treadmill./As if to confirm it,/two grey herons came heavy-/winged into the green sky.’ In ‘Commuter Sunrise’ he is on a tram on his way to work and observes: ‘The good thing about getting up this early/is seeing the sunrise making a view into a picture.’ The implication here – unlike with the encounter with the bullfinch – is that the escape can never be total: it is always compromised.

This is a sentiment that is replicated in Campbell’s writing on writing. Although he claims, in ‘Bookmark’, that:

there is also succour, as there was with the rainbow on the way to work. In ‘The Blue Bell, Warrington’, he writes of ‘This quiet observation of strangers/as clouds cross the table’ and suggests that ‘One more pint and these clouds/will coalesce into paintings.’ And then of course, there are other people who, whilst sometimes hell, are more often merely helpless. In ‘I’m Done’ he meets with a woman for the first time since whatever, and struggles:

The last line is typical of Campbell’s writing in this collection: it is dry, intimate and unexpected, run through with sadness but too fatalistic – or at least too irrefutable in its truth – to bring you down.