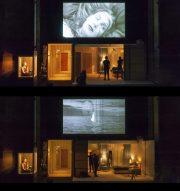 This piece of theatre is inspired by La Maladie de la Mort, Marguerite Duras’ 1982 novella.  The original text explored a homosexual’s purchase of a woman in a vain search for love.  Alice Birch overturns the premise by making the protagonist a heterosexual middle aged man who buys a prostitute’s nights in an existential search for his own emotional identity.  The creation becomes a philosophical study of pornography and misogyny which is brutal, unremitting and repetitive.  And, that’s the point.

Mitchell’s work is played on a three-dimensional visual.  The action in a hotel bedroom is the play.  Simultaneously, a film crew is shooting the actors.  We see the technicians wait for angles and framing.  At the same time we see the black and white screening  so that the aesthetic visual is triply fractured.  Mitchell is the auteur and makes us think of Godard and Bataille.  Her vision is a joyless autopsy of heterosexual relations.  The actors are mainly naked and choreographed in a way that is shocking.  Laetitia 2018.  Dosch and Nick Fletcher perform with courage and integrity.  It is a disturbing creation that is meant to upset the audience.  And it does.