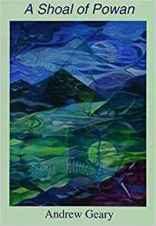 John Forth appreciates a carefully-compiled first collection by Andrew Geary

I think it was Holderlin who claimed that every poem is a homecoming. In the opening poem of Andrew Geary’s debut collection, ‘Homing’ tells of two friends with different origins heading back to camp after an evening in a pub near Loch Lomond:

In this, the third and final stanza, the sudden comparison of a shoal to a blue whale is held in place by a strong guiding hand and an explicit narrative, presences felt throughout. The theme of homing occurs in several poems near the start, and the collection is full of lost homes, damaged homes and of the longing and distress that go with such territory. A similar-sounding narrator tells the story of ‘Carlos’ who plays guitar in restaurants and seems to have become a part of his native landscape: ‘He has Andalusian blood / and it needs to be shaken’. Then, in another vein, ‘Salima’ tells her own story in her own voice of longing for home:

In one of the best of the ‘Homing’ poems, ‘The Malecon’, two lovers and a group of old men provide the contrast that drives a story forward in old Havana:

The poem is completed by a mention of another group who long to be elsewhere but are afraid of sharks and border patrols. The three perspectives combine to leave the reader with a transparent view of the place, and this clarity characterises all of the poems in which Geary explores identity conceived in a variety of ways. ‘Rite of Passage’ recalls the speaker’s teenage years and being hauled around Glasgow with his brother and sister in the back of a van by two Scottish cousins – a potentially hair-raising experience laughed off later as it ‘slithers and skids its way into…poetry’. But there’s also a strong sense of displacement of peoples and cultures. ‘A Thank You’, a competition prize-winner, has as its narrator one of the survivors:

Indeed, ‘stories’ here come in a couple of guises. Some look as if they pre-exist the poem, ready for honing; others barely resemble narratives at all but evolve with the author standing well back. Sometimes a poem can look like a mix of the two, as in ‘Acknowledge and Destroy’ in which a very knowing speaker is introducing different kinds of soldiers with their varying skills, preparation and experience:

There are some powerful personal poems concerning fathers and sons – one, in the form of a letter (‘Dear Son’) addresses a wayward boy in the clearest and saddest terms; another in which the speaker visits a cemetery in search of his father buried in an unmarked grave is unbearably poignant:

‘The Boy with Three Fathers’ is a seriously sad but amusing take on real Dad, Stepdad and God the Father, seen via the point of view of a child and displays the understanding associated with innocence:

and the poem goes on to make use of howlers like ‘our father Richard in heaven’ and the fact that, as in Cider With Rosie, ‘we can all enjoy his presents’.

Judging by the acknowledgements page listing prizes, commendations and magazines covering some few years, it seems that this first collection has been gathered patiently and with great care over a period of time. These accessible and moving poems are unusually strong and without any noticeable ‘duds’.