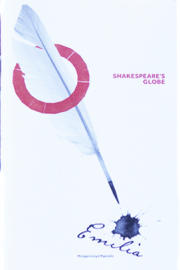 This play is a picaresque adventure describing the life of Emilia Bassano Lanier.  Emilia, born in 1569, was a direct contemporary of Shakespeare, and perhaps the inspiration of his Dark Lady of the Sonnets.  She was a dynamic playwright and poet who struggled for publication and recognition.  This script takes the few facts known about her life and charts an imaginary journey showing her presence as a creative artist who was refused recognition merely because she was a human without a penis.  With this work, Morgan Lloyd Malcom has written one of the most important dramas of our time.

What is achieved here is a hugely popular, muscular epic structure with a deep political drive.  This Emilia is played by three black actors.  Not only does Lloyd Malcom highlight the cruelty of gender discrimination but she imagines Emilia as part of England’s seventeenth century black community and thereby the production simultaneously critiques English misogyny and racism.  The text is extremely clever suggesting that Emilia was the probable author of many of Shakespeare’s famous lines.  We can spot allusions to many of Shakespeare’s dramas including The Merchant of Venice, Love’s Labour’s Lost, Othello – all of which have their roots in Emilia’s creative impulses.  This is the thesis behind the drama- Emilia’s genius was stolen by Shakespeare.

The script is utterly of the moment.  Emilia demands equality as a professional dramatist.  Outraged, Shakespeare asks ‘What would you have me to-refuse to write until women are given the same freedoms?’  ‘Yes’ replies Emilia and, with that ‘yes’, the audience erupts in wild applause.  For women to gain equality as the storytellers on our stages, men have to share power.  This comedy seriously reveals this chronic gender imbalance making us realise that the drama is not just about seventeenth century England but 21st century Britain.  It asks why equality has not been realised in our society where stage narratives are still dominated by men.  This is an entertaining, anarchic and revolutionary work that has enormous weight, passion, humour and debate.  I can’t single out performances as it is clear that the whole ensemble is totally invested.  Brava to Michelle Terry for commissioning this radical work, Nicole Charles for such an inventive and exciting production and to Morgan Lloyd Malcolm for honouring Emilia and all creative women who demand equal rights.