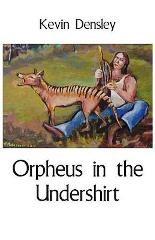 As you would expect from a playfully-titled collection like this, Densley’s poetry is suffused with a wry humour found in teasing out the quirks and details of the memories, landscapes, stories and observations he shares. The subjects of his poems are varied: domestic moments, responses to films, photographs, memories and works of literature, flashes of thought and longer celebrations. Occasional touches of mystery and a deep fascination with people couple with a mastery of rhythm and this overarching chuckle to produce pieces that are both thoughtful and teasing.

Throughout the collection, Densley takes pleasure in puncturing the pomposity of poetry and delights in the bathetic ending. Quoting too many of them will spoil the reader’s pleasure, but the technique is used in a varied manner that prevents this tone becoming too cynical. In ‘To Clarissa’ it dissolves prurience when the poet sees something he should not have seen but satisfies himself with the childish and innocent reason ‘But I’m tall.’ It concludes an analysis of Mickey Mouse’s head size, making a fairly tongue-in-cheek reflection on economics and culture in ‘Mickey Mouse’s Cranial Vault’. It is turned around when the childhood memory of the circus is actually more appreciated than the experience and ‘three decades later, / its strong whiff of manure / smells richly aromatic’.

Humour can be found here in momentary Nashian Witticisms, like ‘Not in Praise of Limestone’ or in thoughtful juxtapositions, like ‘Handel’s Father was a Barber-Surgeon’. Everyday circumstance, such as a picture of Erasmus falling off a wall or a lost key, is transformed through this writer’s lens into a moment to think, to smile and to tease. Humour makes anger palatable in ‘The Valley of the Shadow of’ and updates romantic painting in ‘Poses of Languor’ and ‘Triptych’ – but these are not laugh-out-loud moments. They joke to promote thought, to prompt and to ask.

There are also pieces included which are formed out of a simpler admiration, without bathos. The poet’s response ‘Martha Graham, 1931’ showcases his handling of rhythm and lineation when, after admitting his inability (or unwillingness to attempt) to describe the dancer’s physical grace and appearance in language, he writes

There are several longer poems on Australian subjects that share these strengths. ‘A Notable Colonial Fistfight…’ both tells a tale and celebrates a legend. In this, the rhythm of the lineation, the quick words, the no-nonsense language and the steady progress through the narrative really succeed in drawing the reader through and into the tale. And instead of finishing by undermining the significance of the poem, Densley here uses the awed voice of the defeated boxer to underline the validity of Ned Kelly’s reputation.

‘In Celebration of Great Australian Racehorses’ calls the roll of ten remembered steeds, giving each a stanza or so of deft, rhythmic reportage by way of tribute. Together, these verses discover a varied rhythm of story that counterpoints Densley’s phrasing, tying together history, anecdote and nickname into ‘A joyful salute / to these equine immortals!’ I think it is easily amongst the best pieces in the collection on this account.

The variation within this collection of thirty-eight poems means that a reader will enjoy some pieces more than others and that this appeal may well be different for everyone. The poet himself does not consider his poetry sacrosanct: ‘the process isn’t pure’. It undoubtedly communicates Densley’s perspective – and unique one at that, in which admiration and awe sit hand-in-hand with a wry and self-deprecating chuckle.