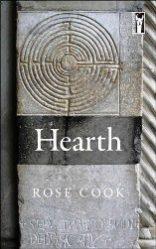 Hearth is a welcoming and cleverly chosen title. Closely aligned with ‘heart’, a hearth provides warmth and light. The hearth is a symbol of love and of life. And indeed Rose Cook’s collection of life-affirming poems lives up to this symbolism. At the outset, in the first section, headed ‘After the Fall’, her poems are heavy with sadness. There is injury:

And, happily, there is recovery, in ‘Notes to Icarus’:

There’s also recovery from cancer and chemotherapy, in ‘Such Grace’:

I suspect that many of us can relate to that. And I like the way she writes – directly and with a straightforward emotion. In subsequent poems death and grief have their sway. We are being conducted through a labyrinth of beginnings and endings – we may take our cue from the cover image, a photograph credited to the author, showing a tondo labyrinth carved on a tombstone, an image of life’s complex journey.

The collection is presented in five sections. In the second, the eponymous ‘Hearth’, there is gladness and warmth – in ‘Daughter’,

and in ‘Poem for Brigid’,

But there is also fear, as in ‘Demeter, Dark Mother’. Where are we to turn? ‘The Mother’s Gift’ brings solace (with an intriguing reference to Vasalisa’s doll, from the old Russian fairy tale), and is followed by ‘enfold’ and ‘Wash Day’ both of which invigorate like the cleanest of linen. In ‘House’ the poet evinces a marked sense of place:

– an apt simile, channeling those strangely lit American portraits of isolation and desolation. Then the scene switches from domestic mysteries to the animal imagery of the section titled ‘Hare’, and in particular to an identification with nature in ‘Hare Speaks’:

Hare is mystery, Hare is magical, ‘Dawn Hare’ is the “sacred hare that sits with Eostre, bringing ancient healing”. I am re-minded (inevitably) of Ted Hughes – and a little later on there is a poem called ‘Crow’ … Anyway, it is apparent that Cook invests her work not only with a felicity of language but also with a depth of erudition. In ‘Three Hares Symbol’ she tells us:

As indeed they have: this sacred circular motif of three interlinked running hares, joined by their ears, stretches back many centuries and many thousands of miles to bring, as Cook says, “kind blessings through the ages”. And I have felt, reading through this collection, that even though some of these poems work better than others, the ideas and impressions become more complex as the eye and ear become more at-tuned to the poet’s style. I cannot resist the song of ‘The Lonely Whale’:

But believe me, this lovely collection of Rose Cook’s poetry is a far cry from being a chthonic mayday. The poems are full of sensitivity and emotion, not to forget several outbursts of sheer humour and gaiety, as in the delightfully titled “A Situation Arising from a Complete Inability to Master Any Language but her Own”. And I am not going to give the game away on that one; you’ll have to read it for your-self.

‘Hearth’ has been portrayed by Rebecca Gethin as a “treasure trove of poems” and it would be hard to improve on that description. Recommended.