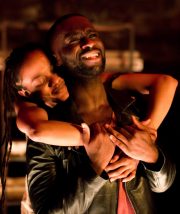 When Christopher Marlowe wrote Doctor Faustus at the end of the 16th century, he was already drawing on German accounts of a medieval legend with eternal and universal reach.

Two centuries later, the epic struggle of good and evil was translated back into German in Goethe’s towering tragedy.

Bringing it into a sceptical 21st century, when any literal idea of eternal damnation has lost its force, could be a stretch.

Undaunted, Tangle, which describes itself as southwest England’s African Caribbean theatre company, is just rounding off a tour that boils the work down to 90 minutes with a cast of three and places Marlowe’s Faustus in a bleak, garage-style setting, with special effects created by strip-lighting and Latin chant mixed with black magic incantation.

The result isn’t always in tune, but its strength is its intensity and in how it makes us strain to imagine the horrors of hell.  We almost believe Mogali Masuku’s Mephastophilis is experiencing it and his/her only surviving pleasure is to suck Faustus in too.

The gender-bending and extensive doubling of the casting also rings true in the nightmarish atmosphere of confusion and the thwarting of desire.  Hell is a realm in which individual importance is irrelevant and even the Holy Roman Emperor and the Pope, if they are unpenitent sinners, are just so many lost souls.

Under Anna Coombs’ direction, the central polarity between good and evil is the one clear strand, as Masuku – by turns an evil angel, Faust’s friend Valdes, Lucifer, the Seven Deadly Sins and Helen of Troy – confidently takes on Joshua Liburd’s believably tormented Faust who makes Marlowe’s pellucid prose his own.

The light-weight Munashe Chirisa, as a good angel, and much else besides, doesn’t stand a chance of diverting events from Faust’s inevitable damnation.