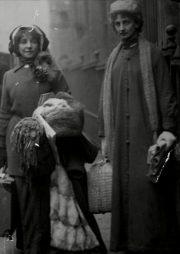 Announcing a Celebration of the East London Federation of Suffragettes in Mile End, 29th May – 20th October, 2018

As Londongrip’s readers are no doubt aware, 2018 marks the 100th anniversary of the Representation of the People Act, the first step on the road to suffrage for women and the outcome of more than fifty years’ struggle, which would end with the Equal Franchise Act in 1928, when all women over the age of twenty one were given the vote.

The East End of London was a crucible for radical ideas and activism, including the women’s suffrage movement, fired in part by the deprivation and inequality experienced by so many of its inhabitants.  400 Old Ford Road in Bow served as the headquarters of the East London Federation of Suffragettes and the home of its leader, Sylvia Pankhurst, from 1914-1924.

A celebration of their achievements will take place in Tower Hamlets from May onwards, including a recreation of the Women’s Hall, which was housed in Old Ford Road, together with an exhibition of the life and work of the ordinary women whose role in winning the vote has been obscured by history so far.  The exhibition will be staged at the Tower Hamlets Local History Library and Archive in Bancroft Road.  Further details appear on the website of the East London Women’s Museum, as well as a complete programme of events* taking place elsewhere.

A large group of volunteers is needed to set up and run the exhibition.  They will participate in all sorts of activities, from constructing the Women’s Hall to serving food from a pop-up kitchen.  Other volunteers will be responsible for running a series of public events linking the problems endured by people of the East End in the early Twentieth Century, such as poor housing and food poverty, with the experiences of many who live in similar conditions today.

Descriptions of all the roles open to volunteers can be found on the website of the East London Women’s Museum*.  Anyone who takes part will have a chance to shine a light on the unique contribution made by women of the East London Federation to the cause of women’s suffrage.  The Federation was a dissident group which broke away from the Women’s Social and Political Union in 1914.

The WSPU believed firmly in the necessity to keep women of “quality” at the forefront of the struggle.  They also suspended their campaign during the First World War to put their full weight behind the war effort.  By contrast, the working class women of the East London Federation intensified their efforts to improve the lot of women, as part of a mission to bring social justice for all.   Immensely practical, they worked to ensure that children were fed and cared for properly throughout the war and with notable entrepreneurial flair, even founded a cooperative toy factory to take advantage of the absence of German toys from the English market-place.