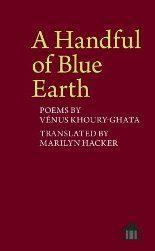 The French-Lebanese author Vénus Khoury-Ghata, now 80, with twenty-two novels and eighteen collections of poems to her credit, shows no sign of letting up. She has received the Académie Française prize in poetry and was named an Officer of the Légion d’Honneur. Her translator, Marilyn Hacker, is an accomplished poet in her own right, having won major awards for both her poetry and her translations. It’s a reviewer’s privilege to comment on this book, which draws on two recent collections by Khoury-Ghata.

Although writing almost entirely in French, Khoury-Ghata is much influenced by the Syrian/Lebanese/French poet, Adonis (pen name of Ali Ahmad Said Esber), seven years her senior, whose poems she has translated from Arabic to French. Adonis led the 20th century revolution in Arabic poetry, whose classical prosody is strictly metered, lineated and rhymed. He introduced experimental free verse (which Arab poets call ‘prose poetry’) using imagist and surreal tropes, though still informed by the oral traditions and cultural landscapes of the Arab world.

The book is divided into three parts: the collection, The Lady of Syros, portions from The Book of Petitions, and The Mothers and the Mediterranean, a section of the latter.

Though created as a statue, she gained her own agency:

The statue remains sentient all those centuries among the other dead, human and marble (“Woman or statue, what’s the difference!”), crossing epochs and seas as she searches for her twin brother who had died mysteriously, his body missing. It is a self-imposed purgatory: “I walked in my death/ pacing its underside for thousands of years/ without going forward.” Her mother cries out, “Come back! The death that carried off your brother/ doesn’t want you!”

The story ends badly. The greedy archaeologist, a Pygmalion manqué, wishes to add eyelashes, and glue hair to her skull, dress her like a doll in a tunic and sandals, so he can “announce his discovery to the four winds/ will describe me as a Cycladic idol/ possessed of great powers…” She can no longer return to her “space defined for all time”, her search terminated, making an ultimate violation.

The poem’s dream-like narrative bears its own overarching metaphors, and the reader is free to choose among them: male predation on women, wanton destruction of heritage, family loyalties, among others. This multiplicity gives depth and richness to the work.

Where The Lady of Styros is written in short, unevenly spaced lines, The Book of Petitions is composed of long, irregularly lined stanzas, almost paragraph-like, one per page. The form entails jump-cut declarations, concrete and extended and, that may seem obvious when taken in isolation; but together they don’t make a coherent narrative whole, even when almost seeming so. The juxtaposed images are rich in detail, sometimes even funny. John Ashbery would understand. Two examples from the twenty-two poems on offer will illustrate:

The Mothers and the Mediterranean is written in the same fashion, but now one finds a coherent, or I should say, cohering message. It is Beirut, murder stalks even children who must study maths from what they observe about them (“The children will play with the Sea/ they will learn addition from the corpses piled on the /sidewalks/ subtraction from decapitated trees”). Mothers and widows of the Mediterranean become crazed in their despair (“Only feathered creatures survive said the mothers/ who knitted wings for the children/ then pushed them off the balcony railings/ Fly, my child/ my love/ light of my eyes… fly through air and blood and you’ll become sniper”). A gruesome normality pervades (“An eye plucked up from the dust for a pistachio ice cream/ cone for a glass of hibiscus juice —/ the merchant on the Corniche trades in everything that can/ be bought and sold”). Snipers enjoy erotic fantasies in their killings (“His machine gun has the soft skin of women with milky/ breasts”) and even take sardonic pleasure in their gratuitous marksmanship:

One sniper, finally, is appalled after picking off a girl through his gun-sights (“The explosion tore dress and chest apart/ The sniper will follow her funeral from his rooftop…/ Tomorrow/ the sniper will break his kalashnikov on his knee like a straw/ Tomorrow/ he’ll exchange his life for a plate of lentils with cumin/ and a glass of arak”). The image reminds me of Esau surrendering his birthright for a mess of pottage.

While I marvel at the skill Khoury-Ghata has put into vitalising a myth, and engaging in wordplay, the potency of her poetry is best when railing against the horrors of war. It is why Picasso’s cubist paintings and contorted portraits earn our admiration, but we will never forget his Guernica.