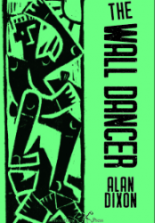 I wonder how many will know of Franz Richard Behrens, Jakob van Hoddis, Max Jacob, Alfred Jarry, Valery Larbaud, Gabriele D’Annunzio, Francis Jammes, Théophile Gautier, who in this collection all have poems written ‘after’ them (a careful attribution, somewhere between ‘translation’ and Lowell’s ‘imitation’), or of Francis Picabia, Ludwig Meidner, Heinrich Campendock who are mentioned along the way? Fewer will know their work, so spending time with this collection will have the added benefit of plugging holes in our knowledge of European art and writing because of the ‘looking-up’ involved. The entire collection (and indeed all of Dixon’s work) may be viewed as a form of anti-Islandism, except that he clearly doesn’t care about attitudinal –isms of any kind and instead knows what he likes and acts on it. His is an admirable sureness of judgement. He doesn’t need to ask anyone. There are poems here in praise of the wolf-whistle and the word ‘cock’ (as opposed to the anodyne and anyway misused ‘cockerel’). And even mentioning Gabriele D’Annunzio is generally frowned on these days.

Alan Dixon is, of course, an artist and this latest collection of his poems was launched at the Redfern Gallery in Cork Street, where his woodcuts were exhibited (and for sale). His abiding influences in the field of art remain Dadaism and Surrealism (he knows these movements were about more than odd-bed-fellow images), but his poetry arises more from German Expressionism and French Symbolism. The opening of the collection’s first poem (‘Village’) may serve as an illustration:

We adults know that sheep bleat, but children know (because we adults have told them so) that cows moo and cocks cockadoodledoo. Here the cock becomes its onomatopœic self. This language of childhood also issues from the fairy tales and nursery rhymes much loved by German Expressionists. The rhyming triplet and the alliteration alert us to Dixon’s probably being a formalist in technique, and for the most part he is—a quarter of the eighty poems here are sonnets (the American Fugitive poet, Merrill Moore, whom Dixon admires, wrote nothing but sonnets)—though he is looser when he chooses to be, or when his poems choose to be. The village is revealed in, if not random, then certainly unhierarchical details and in diction and tone that range widely. The whole reads like the scenario for a film. The ‘dragging dragon’ is a kind of Old English kenning for a dog, as indeed (in ‘Lost Juvenilia’) is ‘a cantering table’ for a horse.

‘A Granite Armchair’ is a rock formation to be found in County Galway and a poem about exclusion. When it ends ‘Turning their igneous heads as I walked west’, we are uncomfortably aware that those not inviting him to join them may just as easily be the rocks themselves. Such merging of subject and metaphor is a favourite of Dixon’s (and of French Symbolism). In ‘The Horse-Husband’, the horse and the husband are one and the same throughout. It begins:

His wife is a violin teacher, an occupation that finds its way into everything she does: ‘She used to stroke his skin of fiddle-brown / And take his tuning peg and twist it tight’. I’m not sure there is anyone in English poetry writing like this—and I can’t imagine any other poet now who’d have a poem begin ‘When mother invited her freckled young friend from the nuthouse’ (‘A Freckled Visitor’), even when that’s clearly something the poem’s speaker would have said. We need to guard against becoming docile.

There have been more conventional poetic influences. While doing his National Service (Dixon was born in 1936), he kept in his locker (riffled through with an inspector’s ‘pacing-stick poker’) Yeats, Thomas, Pound, and ‘for understanding Blake, / Swedenborg complete, which I never read’. I like the straightforward and neatly expressed candour of this admission, which nevertheless does not obscure his determination to improve himself in ways in which we presume he imagines the RAF cannot. Another poem ‘Archilochos the Hoplite’, which features the seventh-century BC lyric poet and soldier whose “dong flooded over like a stall-fed donkey’s” (quoted from surviving fragments), finds Dixon comparing his own National Service experience to the soldiering of the Greeks. There are surprises to be discovered almost on every page. ‘A Quarter of Cockles’ is about the speaker and his cat, which has become ‘a shadowy bag of sharp bone’. Suddenly, in the penultimate line, we meet Tithonus, who was ‘lonely’ because ‘He had no pet’, and we’re back to Cedric the cat and the final line: ‘Old scrap, I hope we can shrink together’. It’s a hard heart that remains unmoved.

There are more straightforward and no less effective (and affective) poems about a wounded gull (a beautiful single-sentence poem), his elder brother, and a meeting that engineers a wished-for parting (and reminds me of Larkin’s ‘useful to get that learnt’ from ‘Wild Oats’); and poems with memorable openings (‘Worlds’ begins ‘Your world, my world, his world: world’s the new word. / These little fragments made whole and big with purpose’) and endings. ‘An Engineer’s Reserve’ concludes, following his brother’s death:

There are quirky tales and poems about himself as writer. There is a parody of-cum-homage to Dylan Thomas (‘the windy Welshman’) and one poem, ‘Thirtyfivers’ that will have readers scurrying for a range of dictionaries (and it will be worth it). It is ‘Campendonk’, ‘after’ Behrens’ poem, that provides the clearest link between woodcuts and poems. Surrealist poems like this one attempt to make poetry as spontaneous as woodcuts necessarily are (because of the immediacy of their process). But Behrens’ poem could just as easily be read as an unconnected list of details from Campendonk’s work. The choice is ours.

The octogenarian who forgot to grow old, Alan Dixon is beginning to gain the recognition he deserves as both artist and poet. This collection of poems—his second with Shoestring Press (the first was in 2005) and his ninth in all (the first was in 1964) is his largest to date. It furthers his claims.