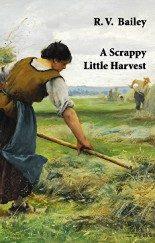 The title of R. V. Bailey’s fifth collection, A Scrappy Little Harvest, can be misleading as her poems explore her preoccupations with large themes – language and meaning, faith and truth, illness and death, love and loss, music and life in the countryside and more. Her themes are universal, but typically presented in a style that is characterised by her insight, wit, humour and understatement. Her tone is considered and quiet, and as we immerse ourselves in her poems, they build slowly but surely a world that enriches us. As Carol Anne Duffy points out, ‘R.V. Bailey’s poems brim with warmth, decency, humour and intelligence – documents from an England we would all love to live in if we could only find it.’ It is a joy to discover such a world in Bailey’s poems, testifying to the generosity of her imagination, the persistence of her struggle to be true to herself and her calling: ‘Seduced by poetry and people / And the fragile vigorous past’ (“A poem for Peter Scupham” – words for her friend that also reflect her own preferences).

Bailey was born and brought up in Whitley Bay, Northumberland, educated at Cambridge and Oxford; she lives in Gloucestershire. For most of her life she has been an academic, ending her professional career as Deputy Dean of Humanities at the University of the West of England. She has co-edited two major poetry anthologies – A Speaking Silence: Contemporary Quaker Poetry (with Stevie Krayer) and The Book of Love & Loss (with June Hall). With U. A. Fanthorpe she wrote From Me To You, and was the extra voice in Fanthorpe’s poetry readings. Together they read throughout the UK and overseas, jointly led poetry courses and adjudicated poetry competitions.

Her academic rigour honed her appreciation of the written word. In “Archive” Bailey speaks of:

Love, truth and the power of words are themes that run like underground streams in A Scrappy Little Harvest. The title, provided by Fanthorpe who died in 2009, is a good example of Bailey’s own understated, self-deprecatory style, which is honest, direct and compassionate. Some of the most moving poems in the collection are ones that refer to their relationship. These poems are celebrations, memories of times spent together. What Bailey does not say is as relevant as what she does. In “After the party”, for example, she captures the moment of realisation that ‘like truth / or love it won’t be caught, slips / through the fingers like soap in a bathtub (“Confused.com”):

Bailey conjures an accurate image of her world with great perception and delicacy. It is not a world that no longer exists: on the contrary it is utterly real and present. In “Birthday poem for 22 July” she writes:

We are once again drawn into an intensely private view of love with its magical ability to transform. Her clear-eyed visions of grief equally lead us to re-discover certainties. Experiencing the old afresh is what draws us to her poems. In “Dark”, for example, Bailey reminds us about the nature of faith, which we have experienced in our own lives:

The poem ends with the reassurance of the redemptive nature of faith and love, and the image used is startling: ‘Love can find the cracks.’ It reminds me of Leonard Cohen’s ‘There is a crack in everything. / That’s how the light gets in.’

Reading “Flowers in the cemetery” is like trespassing on a private conversation between the poet and her beloved:

In “Piano” she tells us how ‘Like having a piano in the house / We all need someone on whom to practise / Love.’ She urges us to ‘practise, practise. That’s the thing:’

In “Morning prayer C21” the interweaving of a phone call with prayer is very effective indeed. One needs to read the poem in full to appreciate its effect. In “Seven years on: 28.04.16” she writes without any self-pity:

In “Terminal Ward” she looks death in the face, the envoy ‘Who knows you well / is by your side, is / Eager to advise. His name is Death. / He holds your breath.’

Bailey pays rich tributes to her friends and family, providing glimpses into her life and relationships with parents, brother, sister-in-law Joan, her poet-friends Peter Scupham and Fleur Adcock, her publisher Harry Chambers, and her extraordinary boss who tried to teach her how to swim, but despite his best efforts, she never learns. What she does learn is far more valuable and enduring:

A poem about her mother, “My mother deals with a case of Vestibule Paralysis”, is very moving indeed, particularly the stanza:

Bailey writes with an ironic precision that allows the subject to come through in fragments of human reality. Her clarity and passion, for example, about life in the countryside lingers in the reader’s mind:

Or, her poem “Disquiet in the countryside” where –

In “Song at harvest time”, the poem begins and ends with the haunting truth about –

The poem “The readiness is all” reminds me of Shakespeare’s ‘ripeness is all’ (King Lear, Act 5, Scene 2, ‘Men must endure / Their going hence even as their coming hither. / Ripeness is all.’).

The last poem in this collection, “Words, words, words”, brings together many of her themes – the inadequacy of language, the redeeming power of love, nature and life in the country. ‘Words have lost their piquancy, / They’re treacherous as weather…’ One is left in no doubt of her vocation.
.

Shanta Acharya, born and educated in Cuttack, Odisha, won a scholarship to Oxford, where she was among the first batch of women admitted to Worcester College in 1979. A recipient of the Violet Vaughan Morgan Fellowship, she was awarded the Doctor of Philosophy for her work on Ralph Waldo Emerson. She was a visiting scholar in the Department of English and American Literature and Languages at Harvard University before working in the asset management industry in London, and has written extensively on the subject. An internationally published poet, critic, reviewer, she is the author of eleven books; her latest is Imagine: New and Selected Poems (HarperCollins, India; 2017). Founder of Poetry in the House, Shanta hosted a series of monthly poetry readings at Lauderdale House in London from 1996 to 2015. She served twice on the board of trustees of the Poetry Society in the UK. www.shantaacharya.com