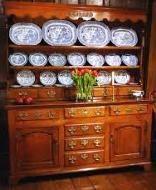 THE ADVENTURE OF THE WELSH DRESSER – PART II 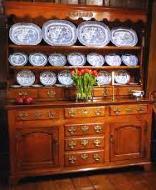 “I first sought my fortune”, began Mr Stopp, “in the Great Welsh Coal Rush of ’45.  Like many young men I was lured by the promise locked up in that black and glittering mineral.  With hundreds of others I made my way westward to claim a share of the wealth that was to be had by anyone with a modicum of good fortune and an ample willingness to work hard.  And work hard we did!  We dug from morning till evening, waiting for that strike which would mean riches for us and warm fires for our families back home — which in my case was in the chillier northern part of England.

“I cannot excuse what I am about to tell you; but perhaps a compassionate listener would find mitigation both in our youth and our weariness that made us careless of what we did.  Nature demanded of us that we refreshed our aching bodies as best we could; and by mutual consent the group of us who laboured in one particular locality adopted the practice of ceasing our excavations on one day a week and seeking some occupation that enabled us to enjoy fresh air and sunlight. Having already noted my one-time prowess in athletic pursuits, you will not be surprised to hear that I proposed that we should keep our bodies in good trim by sharing in sporting activities.  In short, we spent happy and carefree hours playing a variety of ball games.  The sport that we found most congenial was the Rugby  version of football, in which, as you may know …”

“I am aware of the rudiments of the game”, said Holmes, “and have often had cause to remark that it is only the British who would have seized upon the action of a cheat and enshrined it with great solemnity as part of a national pastime.  But enough of such reflection: proceed with your most illuminating narrative.”

“Modesty forbids that I should labour the point; but it is a fact that, under my coaching, our little gang of prospectors became quite adept at the open passing game.  Thus, in a little while, we grew anxious for some opponents with whom to match our skills.  We had mixed but little with the natives of that area, our work being of a solitary and time consuming kind.  But of course we had to buy provisions and the like and consequently we were known to the villagers and had some kind of conversation with those who were prepared to speak English with us.  We knew, therefore, that there was also a local Rugby team.  Inevitably a challenge was laid down and quickly accepted.  Thus, one fateful afternoon we found ourselves lined up for our first – and, as it proved, only – competitive game.

“I can hardly convey to you, Mr Holmes, the strangeness of what occurred that day.  Both sides were in position and we were about to kick off when one of our opponents gave an agonized cry, a few anguished words in his native tongue, and as one man his team rushed off the field!

“We were dumbstruck, of course.  At first we thought this might be a local variation on the game or some tactical manoeuvre; and to be on the safe side we scored three tries and a conversion before conferring amongst ourselves what this desertion might signify.”

Holmes was leaning forward, eyes shining.  “Go on, go on, ” said he, “this is most singular, most singular!  And did you obtain an explanation for this odd behaviour?”

“At first we did not.  Eventually we drifted away from the playing field and went home.  Had I but known it, those next few days were to be the last in which I would have any real peace of mind.

“Then, within two or three days of our aborted match I received a visit late at night from a group of elderly gentlemen, respectable in appearance, but of most solemn aspect.”

“‘You are Mr Ebenezer Stopp?” intoned their spokesman. ‘We have come to speak with you about that disgraceful exhibition at the Owen Glendower Memorial Park last Saturday.  Is it true that you and your associates fielded a Rugby Football team with thirteen players?'”

“And then Mr Holmes I understood.  My origins, as I believe I told you, are in the north of England: and in my youthful impetuosity I had simply passed on to my fellow prospectors the form of the game as it had been introduced to me.  I now realized what a tragic error I had committed.

“You joked, Mr Holmes, about the history of the game of Rugby Football.What you perhaps do not know is that a great schism took place among its founding fathers as regards some of its most fundamental Laws. And, as is ever the case, in such matters there are those who become fanatic in the pursuit of what they conceive to be purity.  I must now mention the name of a dread organisation, more feared than the Camorra or Mafia, a gathering of shadowy men who have taken it upon themselves to administer orthodoxy and eliminate heresy.  They are known simply by the initials RFU.

“For a player bound to the RFU an association with one who followed our northern version of the game — the League, we call it – would be (as I now realize) as if a high caste Brahmin were to find himself in contact with an untouchable.  The fifteen poor wretches who had, in all innocence, turned out like good sports to play against us would have been horrified to find themselves lining up before opponents whose very numbers betrayed that they were adherents of an alien code.  Small wonder they fled in terror before the contagion reached them.  But they must have known in their hearts, even then, that they were doomed, as regards their sporting future.  Having once set foot upon a pitch with us they could never again be admitted to any rites or ceremonials of what the RFU would regard as the One True Game.”

Holmes shook his had sadly, as one overcome by the cruel follies by which man inflicts misery upon his fellow man.

“The rest of the story is briefly told.  I and my fellow prospectors became pariahs in the district.  Fortunately the RFU had no immediate powers to revoke our mining claims and, for me at least, it was only a short time before I established my right to a rich seam of anthracite which ensured a successful financial footing for future business ventures elsewhere.  I left the mine in the hands of an agent and fled the area as rapidly as I could.  But from that day I have always felt myself to be both a guilty and a marked man.  Sometimes I have managed to forget the incident; but as soon as this strange phenomenon assailed me I was instantly suspicious that my past was hard on my heels.

“The Welsh are a proud people, Mr Holmes; very deep and sensitive to the Powers of nature in a way that many of us more mongrel English are not.  Who can say but that a disappointed prop-forward whose career was nipped in the bud by my stupidity might not have tracked me down and be planning some appalling revenge?

“I will tell you something, Mr Holmes.  In the three weeks since these manifestations began I have tried to locate all my former team-mates in that ill-starred side.  Not one of them could I trace.  Perhaps I am the only survivor, tortured by being left to the last as befits the instigator of the whole sorry episode!”

Mr Stopp’s voice had been rising in volume and becoming more hoarse throughout these last sentences; and it was no surprise to me, as a medical man, that he collapsed at our feet in a dead faint.