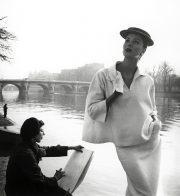 Louise Dahl Wolfe: A Style of her Own

These dark winter months, when accounts of inappropriate advances are rocking Westminster and Hollywood, are the perfect time for seeking light and sanity in the clean-cut, calm glamour of fashion photographer Louise Dahl-Wolfe.

Dahl-Wolfe (1895-89) trained at the San Francisco Art Institute, where she acquired a grounding in human anatomy and colour that would inform the rest of her career.

Whereas the portrait photographers who went before her tended towards the formal and unnatural, she understood the impact of male versus female anatomy on movement and poise and she made colour resonant, not random.

The exhibition begins with some of the 86 covers she created for Harper’s Bazaar.  Stand-outs include Lauren Bacall in the 1943 pose that won her her first movie part.

She stands in front of a door with a frosted glass panel marked with a cross and the words American Red Cross Blood Donor Service.  Through it we see the shadowy figure of a nurse, while Bacall stares out dreamily with vivid red lips and a red bag with all the connotations the colour carries.

Another favourite for me is Clothes for Studying, also 1943.  It portrays a college girl with a sweetly earnest expression in a tweed suit with tortoiseshell buttons.  As proof of her credentials beyond her sense of style, she carries a book on aircraft and another on the Fundamentals of Mechanics.

Move on 10 years, war is over and the mood is celebrational as Queen Elizabeth II is crowned.  The angle for Harper’s Bazaar and Dahl-Wolfe is: Clothes for Summer Everywhere.  Her model Jean Patchett kneels gracefully as if before royalty in front of the Moorish tiles of Spain’s Alhambra.  She is wearing a yellow shorts suit and a yellow hat, a triumphant shade offset by the orange, black and turquoise of the tiles and intensified by yellow flowers.

Dahl-Wolfe’s appreciation of designer elegance was enhanced by her understanding that life was the opposite for much of the population, for instance in 1930s Nashville.

A section on the impact of the Great Depression includes a self-portrait of Dahl-Wolfe nude lying face down, as if wounded or even dead on a bare wooden floor with a stair banister pole to the left of the shot suggesting the possibility of a fall.

Alive and enduring, the denizens of Tennessee include Mrs Ramsay in a 1931 study at her log cabin in the Smoky Mountains.  She sits next to a plate of gourds, knobbly and resistant, reflecting perhaps the character of the sitter, who wears a 25-year-old hat with a flowery decoration incongruously girlish above the weather-beaten, seen-it-all face.

Another study in the harshness of things, At Alfred Starr’s Theatre, the Bijou, shows Starr, the theatre manager, sitting in his empty theatre surrounded by rows of seats with tattered covers.  He too is tattered and wild-looking in filthy trousers and dust-covered boots.

Dahl-Wolfe’s studies in grim realism are paired with her efforts to capture the true essence of the stars of Hollywood and high society and she had access to them all.

Vivien Leigh, in her dressing room, for Gone with the Wind, is tiny and perfect in layers of taffeta.  Yves Montand, in his Paris studio, is all Gallic shrug and mischievous, gesturing hands.  Orson Welles looks out through eyes that speak intelligence, purpose, burning ambition, from in front of the storyboard from Heart of Darkness.  Christopher Isherwood and WH Auden are captured in Central Park, New York, angular, edgy, together and yet a discreet distance apart.

As this is London’s only Fashion and Textile Museum and this year marks the 70th anniversary of French fashion house Christian Dior, this first major retrospective of Dahl-Wolfe in Britain includes a section on Dior.

The four dresses spanning a 1947 white evening gown to a 1967 mini-dress are beautifully made, but not his dreamiest.

More engaging are Dahl-Wolfe’s photographs of the Paris fashion scene.

Wider Shoulders, Wider Sleeves: the opening day for trade buyers of Dior, 1956, has a dry wit as the model Barbara Mullen, haughty in black Dior, outclasses the mere mortals waiting meekly on a classically Parisian staircase, lined up for entry, clutching their invitation cards.

Her wry joke is to avoid photographing Dior designing or surrounded by models wearing his gowns.  Instead, Berard looks on as Dior plays patience, even then exuding style.

Auguste Rodin at One Canada Square. Review by Jane McChrystal. The Boy Who Loved The Sea and Other Stories