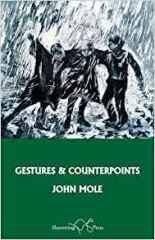 Wendy Klein admires the craft with which John Mole makes poetry out of the deepest of feelings.

Writing in PN Review, Peter Scupham states that John Mole is one of the best poets of his generation. In the Times Literary Supplement, mentioning a previous collection, Bernard O’Donoghue notes that ‘it adds to Mole’s complement of some of the most engaging English poems of the past quarter century.’ High praise. Daunted by the task in hand, I find myself taking stock of my own faint poetry footprint. I remind myself that John and I are the same age, that he taught me one term at Oxford, the first-ever undergraduate diploma in creative writing, and that he was kind and helpful about my early efforts. I remember him as a fine teacher, and reading his poetry now, as then, is a lesson in ‘how to.’

This is quite a big collection: 104 pages long, divided into three sections. The first untitled section is the longest. It consists of 58 poems covering many subjects, many moods and nearly as many styles/approaches to the subject of poetry, life in general, and in particular, the craft of poetry as it relates to life in general. The first poem, ‘The Sound of Ladders’, is a riff in tercets on home improvements, which begins upbeat as ‘the whole street puts a face on it / and neighbours look out at each other.’ The jaunty/folksy quality recedes as the sound of ladders going up to paint ‘a corner of the world’ where houses are ‘safely bought and sold’, cuts to greed and social inequality, with a reference to a William Blake engraving (his smallest image) where a tiny figure at the foot of a long ladder looks up to where the top disappears into the sky and is captioned by the outcry: ‘I want, I want.’ This poem sets the tone for the book in the sense that nothing is as it first seems; that underneath the gloss of a new coat of paint is want, need; that cosy domestic settings are fraught with undertones, the approach of loss and loss itself. This seems to presage doom and gloom, but John Mole is nothing if not witty. In his poem ‘The Bike Shed’, he looks with undisguised nostalgia at boys smoking between classes at ‘best behaviour’s location / for time off….’ while back in class, ‘

Mole is a jazz musician himself and there are poems here that are musical in form, theme and rhythm. ‘A Polar Carol’ borrows the cadences of Robert Service, or Rudyard Kipling, becoming, in true ballad style, a celebration of love and a lament at once:

Poem by poem, loss creeps into the text, linked to music and to art. In ‘A Kind of Blue’ the poet, knocking on the door of his own house, remembers Miles Davis in Paris, knowing the number of his room, but not the hotel.

That note of uncertainty snaking through the text.

There are two poems which together make up the title of the collection; and they take painting to exemplify the process of creativity from tentative beginning to uncertain ending, suggesting the personal journey. In ‘The Gesture’, poet as painter approaches the blank canvas and is hesitant ‘to repeat a gesture once made freely with a synthesis (italics mine) of joy’. But here he is halted by the spirit of Auerbach, who both tempered and extolled the extremes of the painter, Lucian Freud, providing a ‘safety net of manner’. Recognising the strength and fallibility of that ‘safety net’, the poet highlights the flaw: to accept it would mean being left with nothing but ‘a blank and vacuous deception’, acknowledging, ‘No, I am not ready yet’. Using his musician’s skill-set, he takes the combined melodies in ‘Counterpoint’ one opposing the other

The two sections of the book that follow – ‘Frailties’ and ‘Circumstance’ – are focused primarily on the processes of illness, recovery, and hope, the retrieval of what can be retrieved. In ‘How all Occasions’ the poet evokes King Lear in the scene where Gloucester kisses his hand: It smells / Of mortality. That line-break stops the reader’s breath, as poet and reader are plunged into memory in ‘…a subterranean / Gents,’ where the poet observes his hands under the air dryer as ‘A septuagenarian blur / of ripple and flap’.

The twenty-two poems in ‘Frailties’ are laid out economically, none longer than 16 lines, many only 10 or12, initial capitals heading every line, emphasising their formality. Despite the gravity of the subject matter, sly humour creeps in. In ‘On the Menu’, the poet puns on misreading ‘Apricot Soufflé / As Apricot Shuffle’ and dances ‘to the music / Of transposition’, observing how this moment might come ‘To compensate / For all those longer / Desserts of Vast eternity / That lie ahead.’ In ‘The Trick’ he reminds himself of the bedside wit of Walter de la Mare Too late for fruit, / Too soon for flowers, then prods himself to ‘Cheer Up’, ‘That there’s work to do / while the heart still beats.’

The last section of this rich and powerful collection, ‘Circumstances’, is dedicated to the poet’s deceased wife, Mary. It is made up of a deeply touching sequence of 19 poems, cataloguing her illness and death. They include moving scenes from his own tender care for her, reflections on their life together over time and, finally, a facing of that combination of utter loneliness and hope for eventual recovery which follows intense and tragic loss. With exquisite imagery the poet maintains a formality of presentation as if to contain the depth of feeling, to keep it from spilling out into naked emotion.

In ‘I Hear You Calling Me’, a nostalgic Irish tune encompasses that ‘…redemptive / Sense of the ridiculous, / As some of us in growing old / Find sentimental songs.’  Jewellery features in ‘Some Dreams’:

In ‘Hang on’, wisteria leaves cling to the branch although ‘No doubt they will succumb / To frost or weariness, / shedding their burden…’ In the final poem ‘Thaw’, a delicate metaphor, the thought of the beloved ‘Is lamplight on a dark field, every grass blade /warming to your touch as memories…’ This poem confirms my core belief that it is not just the spilling out of our innermost feelings, the catharsis, that is important, but rather the crafting of those feelings into art. This is what John Mole does in this collection, a glowing achievement, following on from a lifetime’s work of huge variation and skill. I cannot recommend it too highly.

Alessandro Blasetti and the Neorealists: A Review of 1860. By Jane McChrystal. 101st km, Further, Everywhere