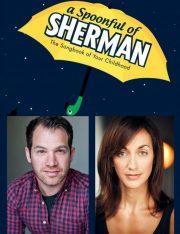 After studying literature and painting, Robert B. Sherman, the elder half of one of the world’s most prolific song-writing duos, set about writing the great American novel, while his younger brother Richard, who had studied music, was working on the great American symphony.

But then Al Sherman, their father, himself an established song writer, challenged them to write a catchy tune that people would want to hear.  The rest is history: popular hit followed popular hit, including film scores for Mary Poppins, Chitty Chitty Bang Bang and The Jungle Book.

It amounts to a legacy of which Robert J. Sherman, son of Robert B. and also a song-writer, is justly proud and shares in what is not so much a spoonful of sugar as a joyful overdose in the decadent, escapist setting of Zedel’s Crazy Coqs bar.

Star of the show is pianist Christopher Hamilton with his sparkling, pitch-perfect accompaniment and occasional show stealers.  He is for instance a wonderfully bouncy Tigger in “The Wonderful Thing about Tiggers”.

He accompanies Helena Blackman and Daniel Boys as they sing their way through the output of Sherman grandfather, sons and grandson from the 1920s to now, with buoyancy, tongue-in-cheek flirtation, great enthusiasm and very little nuance.

Robert J. Sherman narrates and, to prove he can, plays and sings one of the nearly 40 hits that make up the programme.

For me, the best songs are from Mary Poppins whose upbeat life philosophy allowed for thoughtful shade as well as light.  Personally, I missed the context of the films that would make the unrelenting cheerfulness feel less like force-feeding, but the die-hard Sherman fans in the audience, singing along and re-living their childhoods, couldn’t get enough.