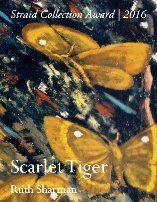 Actually starting to write this review has been the ultimate challenge. Starting to write it meant ceasing to read it, and I have seldom been so reluctant to put a book down. Like Penelope tirelessly unpicking the day’s weaving each night, I have had to cross out my notes each time to begin again. To read this book, is to reach the end and to be filled with the desire to go back to the beginning and start all over.

If it wasn’t the perfection of language laced through with feeling, evident from the first poem ‘By heart’ about the poet’s dying father, a lepidopterist:

it was the freshness of the imagery in ‘Evening’:

Then suddenly an astonishing sestina, a form that locks a poet into six end words in a specific order and too often ends up with strained repetition. ‘Morphine’ takes the six words: sleeping, life, nothing, over, light, shadows, into a death-bed scene which allows for persuasive, almost incantatory repetition as the poet wishes for her dying father to be set free of his life

She wisely shies away from the cramping final tercet, which requires the poet to use the six chosen words two to a line in the strict order, which the rules prescribe. Instead she allows the piece to end naturally with a final six-line stanza.

The received wisdom of contemporary poetry suggests metaphor is always stronger than simile. Sharman challenges this message again and again. In ‘Curtains’, her baby son sleeps:

and as an older child, the image reappears in ‘Samsara’:

and even more perfectly in the title poem where the Scarlet Tiger moth, observed by father and daughter:

After reading and re-reading I was left with a sense that I would trust this poet with almost any topic. Although it is impossible not to be struck again and again by the detail of the moth and butterfly world she experienced through her father, she is as at home in other nature settings as she is in relationship and ekphrasis. In ‘Phugtal’ she writes of a Himalyan mountain, its perils similar to the path of relationship:

In ‘The studio chair’ (after a painting by Sara Lee Roberts) she avoids both the too-easy drawback of description that tends to dominate much ekphrastic poetry. She begins:

creating a world of the chair itself

It is here that the poem itself metamorphoses into the object, becoming a piece of art, separate and distinct, achieved with a magician’s touch of huge subtlety.

Reading Scarlet Tiger I have learned how much harder it is to write a review of a book the reviewer has truly loved. There is no space for the “what worked well” and “what worked less well” when a poet is as convincingly skilful and such a remarkable wordsmith as Ruth Sharman. Reading her poems is like being drawn into a cocoon which may be delicious, dangerous, or heart-breaking, but the experience is so compelling the reader cannot pull back, nor wish to do so.