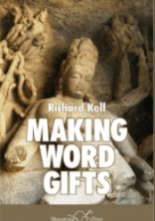 Richie McCaffery takes the opportunity to extend his appreciation of Richard Kell’s poetry.

The Irish-born but North-East England settled poet Richard Kell has been a small, distant but constant blip on my poetry radar for many years. Perhaps this is because he taught literature in my home town of Newcastle, or because he was closely involved with the much missed Other Poetry magazine. However, until receiving this book for review, I hadn’t actually read much of his poetry at length, with the exception of The Broken Circle (1981) which I much enjoyed. Kell is now ninety and has been writing (published work, that is) for six decades and Making Word Gifts is part of a recent prolific spurt on Kell’s part – his fourth collection since 2008, less than ten years ago. Why am I focussing on timescales? This is because time is the undercurrent to all of these poems – Kell is aware that it is running out and he uses this collection as a means of staring unblinkingly and unswervingly at death, and death without the usual trappings and solaces of organised religions:

The thing is that Kell’s rather comfortless vision of an atheist’s death is extremely persuasive and a number of poems follow this theme, such as the futility of human effort and striving, without becoming overtly depressing or overly repetitive. This is arguably because Kell is clearly refusing to give up and go gently – the very presence of these poems proves the worth of what Kell is doing and his vision is not nearly as fatalistic as it might initially seem. There are certainly plenty of poems that talk about the frustrations of aging – of forgetting words, of words changing their meanings over time, and of trying to write while fighting against ‘the weight of wanting to do nothing’ (from ‘Wet Day’). Kell sets out what he is up against in ‘Senile Song’ where he poses the question ‘How can the young know what it means / to feel each inch a mile?’ But Kell does travel far in these poems, and because of the pressures of time, he cannot afford to indulge in doubt or grey areas, the world is seen in polar opposites, or Manichean narratives of life and death, light and dark. This leads to an urge in the poems to want to redress what is wrong with the world, as can be seen in ‘The Progress of Wisdom’:

A vital part of this redress is to be found in Kell’s poetry, which is often about undoing layers of societal mis-thinking, or bad teaching. In ‘Glory Be to God’ we see how Kell learned to discard the pantheism of an early poetry hero-figure that he found in Gerard Manley Hopkins and in ‘Imagine’ the speaker remains adamant that despite all the advances made in science, he will remain ‘a literate human with a text / providing a more elusive treat’. In the long, dream-like closing poem ‘Good News’ the speaker says that even if the world is in chaos, even if god does not exist and although death is certain, the poet must retain a faith in the ‘muse’ and the fundamentally positive influence of poetry. ‘Word gifts’ are Kell’s offerings to this muse. As such, Kell’s world view is an optimist’s, or a meliorist’s, and reminds me very much of the epic poetry of Tom Scott, of wanting to find the ‘New Jerusalem’ in society.

Making Word Gifts is set out like a painting, with ‘foreground’, ‘middle-ground’ and ‘background’ sections. It should be said that most of the strongest poems in the collection are in the ‘foreground’ section. Take, for instance, the opening poem ‘A Love Poem’ which is dedicated to ‘my daughters, my surviving son’ (note that devastating pre-modifier ‘surviving’). In this poem Kell discusses that age-old dilemma of wanting to write poetry filled with meaning and sincerity, but often having to settle for techniques and rhetoric:

The humility and honesty of Kell’s approach ensures that his fears are unfounded, and his direct, limpid style allows him to tackle ‘big ideas’ head on, and even if they are not solved to his satisfaction, he nonetheless makes ‘music from argument’ (‘Rhyme and Reason’). For a collection that grapples with such dark and serious themes, it is not without an underlying silver lining of wit. Although there is certainly a memento mori feeling here and there are poignant lines (such as the past tense in ‘Know Thyself’ where the speaker says ‘I loved to walk where gorse and heather grew’) I do not get the overriding impression of a mind resigned to death, but one still endlessly searching, propelled by both love and frustration. I am glad to have got to know Kell’s poetry better; his presence on my radar is larger as a result and I’ll be looking out for more of his work. I hope too, there will be more poetry to come in the future.