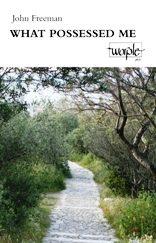 John Freeman’s first collection was published in 1975, and since then his collections have continued to appear regularly; this is his eleventh and proves his commitment to a lifetime in poetry. Even without the formal biographical details we could deduce that living and working with literature is something he relishes as part of daily life, something that as a teacher he shares with a range of colleagues and students – and readers. These poems are predominantly in the first person, anchored with sufficient place names and family members to justify their status as autobiography. The landscapes he knows well and the natural world underpin these poems.

The opening poem, ‘Me and the Gatepost’ establishes the tone of the whole collection personal, conversational, casually idiomatic, a direct address to the reader. He uses precise scene-setting and strong visual detail, both of which have specific location and associated family memories. It’s likeable, companionable; in sharing his memories, letting them overlap through successive poems, he allows the reader to build up a picture of everything that has made him. Once he has given the gatepost its unique identity, we are hooked –

This picture of the gatepost allows him to introduce his mother, sharing a gossipy secret with a neighbour, so the colloquial ‘between you me and the gatepost’ slips in apparently with no effort, allowing him to link this childhood permanently to the post’s fissures ‘in blissful silence’. This happy play with language is picked up in the subsequent poem, ‘Interior With Red Linoleum’ – where even the title mimics so many paintings – when ‘A nail under the lino is proud, she says’ and Freeman encounters this use of ‘proud’ for the first time, ‘… a traditional use,/ a kind of speech not taught in school’. Lightness and humour illuminate the seemingly mundane domestic scene, as they do in ‘My Grandfather’s Hat’, placed third in the National Poetry Competition in 2012. This poem moves easily through time – layers of childhood memory, grandfather’s life as a sailor round Cape Horn – crystallised in the ceremony of one moment as grandfather walks slowly down the tiled path, wearing his trilby ‘… grey and sleek like a new plush toy.’

Freeman’s material falls naturally into free verse; this is both its strength and its weakness. At its best, Freeman’s poetry is direct, sharing its emotional honesty with the reader, and finding an answer there. In ‘In Apple Blossom Time’ the opening focus is on one simple fact: the annual arrival of apple blossom, used by his mother as the bait for a hoped-for visit. However, it also stands in for Freeman’s – and by association the reader’s – guilt in being too busy to visit until too late; for Freeman, finally seeing ‘… the dazzling pink and white/ flowers of the unpruned tree’ brings pain ‘…as acute as any I have ever felt’. It transcends its one-point-in-time, anecdotal description to become a poem about loss and grief.

There’s a fine line between the conversational and the prose-y and it’s here that Freeman is less successful. The immediacy of natural speech rhythms along with the syntax and vocabulary of everyday can, at times, make these poems appear as unedited first drafts – and yet it’s a weakness that draws my sympathy. It’s the style of a poet whose connection with his world is so close that everything around him seems translated instantly into a poem. This makes him a natural travel writer: the concluding sequence ‘Attic Interlude’ consists of ten poems rich in detailed descriptions of Athens and its surroundings – ‘ a street of fragrant orange trees’, ‘the Parthenon’s/ blank south flank of hefty, muscled pillars’ – along with the people: the ‘multilingual gaggle/ of teenagers’, a waiter, the young man in the ticket office at the Acropolis. His three-poem sequence on Llandaff is a gentle and companionable walk around the cathedral, responding to the feelings it arouses –

It’s the sharing of ‘fellowship’ that makes these poems appealing. However, there are poems weakened by a looser, too-colloquial opening and these have the effect of diluting the quality in the stronger poems. One example will suffice, from ‘The Mug In The Common Room’ –

What Possessed Me is a long collection at one hundred and thirty-six pages and some judicious editing could have brought out its strengths. Freeman generally avoids form but when he uses the haibun ( a Japanese form combining prose poem and haiku) the demands of this structure focus his attention and invigorate his language. November snow is thawing and providing an unexpected range of visual and aural experiences, while intrusive cars in the narrow lane bring a tension that heightens the human vulnerability. The contrast between the explanatory nature of the prose and the snapshot-image of each haiku

matches the natural shape-shifting scene. Haibun is all too rarely used in British poetry; here Freeman reminds us how effective a form it is in the hands of a keen observer of the balance of human and natural worlds. It suits his alertness to his surroundings and the haiku bring a sharpness and distinction, as in this glimpse of blackberry bushes brushed with snow

What impresses in this collection is Freeman’s constant desire to share his eagerness for life, other writers and the delights of places – all the things that ‘possess’ him – with readers. This is not abstruse or cryptically coded poetry but a collection lit with humour and openness: as I wrote above, likeable, companionable.