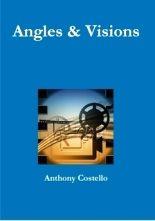 In my review of Anthony Costello’s poetic debut The Mask (for Sentinel Literary Quarterly, October 2015), I tried to celebrate the treasure-trove quality of that book, where a turn of the page can take us not only into completely unexpected thematic territory, but very often into stylistic realms that seem to come from another writer altogether. As this second collection confines itself to the relatively narrow focus of Costello’s relationship with the cinema, it can’t aspire to quite the same level of shape-shifting unpredictability, but the playful element at the heart of his writing is still very much alive and kicking – or as I put it in that first review, writhing.

I mean ‘play’ in pretty much a Derridan sense here, because Costello’s poetry invariably casts doubt, albeit in humble form, on the certain certainties of which lesser minds tend to become all too glibly assured, and to see beneath the surface values of any given text, written or cinematic, in order to point up ubiquitous duality and paradox. In fact I have the sense that Costello, as an undeclared but deliciously disingenuous post-post-structuralist, is forever introducing a further level of ironic/distancing discourse, by subjecting the (merely-)post-structuralist approach to its own deconstructive subversion, i.e. creating a form of play upon a play (quite possibly upon a play).

There’s a hint of this in ‘Hamlet’, with its final line the ghost of the ghost of The Ghost, as if our culture’s most famous play (whether a pun is intended here is a typically Costello-esque question) has been spawning endless-line-of-mirrors-like simulacra of itself, from stage to screen and back again, ever since it was written – a concept/conceit that recalls the ending of ‘How Not to Write About Sand’ from The Mask, where satirical reference is made to an anti-poem / about a failed poem about sand in the style of a successful poem / about snow by another poet. This drolly bathetic spirit underlies the whole collection, which though it may appear primarily an act of homage to the cinema that has proved a lifelong boon and comfort, never descends into uncritical panegyric. Just as the individual films referenced are not all Citizen Kane quality – they include International Velvet and the sexploitation spoofs of Russ Meyer – Costello recognises that not all film stars have the minds of great artists. ‘On Becoming Glenn Ford,’ having alluded to Nabokov by way of contrast, summons an all-American movie hero who, for all his bluff well-meaning goodness of heart, resembles a virgin lawn. As another instance of Costello’s wheels-within-wheels imagination at its most exquisite, note the splendid use of dots in the following passage. What the French call points de suspension have been employed by writers for many purposes, including the nuances of different types of pause between phrases (cf. Pinter), but perhaps not until now as an enaction of pipe-smoke clouds, themselves an enaction of vacuous non-thoughts:

It is possible to surmise that the relationship between Costello and the less high-brow of his cinematic name-checks is similar to that between the post-structuralists and the celebrated bus timetables that some of them held to have been of equal cultural significance as the works of Shakespeare. To the objective critic, the post-Gilda Glenn Ford of numerous stock B-movies may reveal as much about cinema’s true meaning, and cultural relevance, as the Belmondo of A Bout de Souffle or the De Niro of Taxi Driver.

Another sense in which Angles & Visions refutes any presumptions about its own parameters is the fact that Costello does not just write about actual films, actors and directors, but uses what he has learnt through his devotion to cinema as a means of informing his own poetic technique. In particular, he leans on film tropes and narrative methods in order to create some of the most exciting poems here. ‘The Card Game’ pictures an all-night session between various characters, apparently taken from the poet’s own life, amalgamating his movie-derived stock of images (By the age of 13 / I’d watched every/Hollywood/poker movie) into a creation whose originality is distilled in the memorable phrase at the end of this sentence:

But there are still dues to be paid, even as new ground is broken. The story may seem to have evolved away from its own roots, until the protagonist, losing the game to these possibly dubious interlopers, needs to look to his silver-screen idols for inspiration:

Later Costello asks us to imagine films that have never been made, but should be, and theoretically still might. ‘The Battle of the Sexes’ surmises a strange treatment based on the story of Erichthronius, born of the attempted rape / of Athena by Hephaeastus, in which, from a Clintonian spurt of semen on her virgin’s thigh, a boy germinates. ‘Snap Shot’, perhaps the most accomplished piece of all, immortalises a crass but adept Texan hustler, a sort of anti-Fast-Eddie, who shrugs off (in two senses) his own filmic germination by answering the question of whether he’d seen The Color of Money by saying I believe I have…ya wanna play for a beer?, and later takes leave of both narrator and reading saying something slick / about his long-term squeeze. His slickness has been both captured and mocked by Costello throughout the poem:

Of the several film-related poems from the The Mask re-published in this collection – all of which read differently here from the way they did in the first book – perhaps the one which elicits the most intriguingly post-Derridan re-construction is ‘Jack the Ripper’. In my earlier review I praised this as among the more chilling in the book, pointing out that ‘Rarely can the poet/artist’s mind have been so closely associated with psychopathy, as Jack moves towards the scene of his crimes with [William] Blake acting as a form of mentally diseased pied piper’. However, the perspective of cinema adds a new dimension. I step out of a Hansom Cab, begins the final line, as if parodying an A-lister stepping onto the red carpet, And sniff the air. My first review cited Plath’s ‘Lady Lazarus’ here (‘I eat men like air’), but the new context makes me think of Nureyev describing a dancer’s hunger to breathe in applause – a true artist’s oxygen – at curtain calls. I visualise Jack sweeping into his own premiere, self-aggrandisingly milking his own effect on the audiences of his day.

Costello himself deserves much applause for this second act in what might well be a long poetic saga.