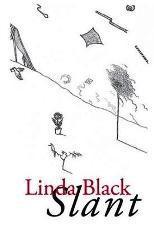 A Route Map of Liquid Thought: Brian Docherty takes a look into and around Linda Black’s latest collection

This book’s title is taken from ‘The Slope of a Hill’ (pp. 49-51) and this poem informs the book’s cover artwork, which is also by Black. Emily Dickinson’s maxim, ‘tell the truth but tell it slant‘ is a possible source, and Black is no doubt well aware of this expression, and also perhaps of Paul Farley’s notion of leaning over while reading italicised passages.  Slant is a substantial presentation of new or unpublished work, maybe half the book, and some gathered from previous pamphlets, anthologies, or magazines. We may, I hope, assume that other, recent, work might be forthcoming in due course.  It is clear from reading through the book that Black is a knowing and referential writer, who has benefitted from the better sort of writers groups, and also productive reading and study. There is no trace of ‘New Kid on the Block’ syndrome in Black’s writing, but some evidence of the sort of lived experience not available to apprentice writers. A perusal of a piece titled ‘Trusting the Process’ on the old – now archived – website of the Poetry Society, gives some background, and references Black’s training and praxis as a visual artist. Black sees the world differently, literally and metaphorically.

Her relation to Modernism, Post-Modernism, and Feminist critics such as Julia Kristeva and Hélène Cixous, especially the notion of ‘white ink’, is no doubt complicated; but it is apparent that Black’s writing has a complex relation to any version of literary tradition you care to invoke. And if anyone cares to say that most (male) writing & criticism is smug, boring & phallocentric, no arguments here. However, what anyone force fed Carol Ann Duffy (say) for ‘A’ Level would make of Black’s work is another matter. Nor does the writing here much resemble the formidably accomplished Denise Riley, who seems to be the current Officially Accepted Post-Modernist writer of choice. We could point to say, Frances Presley, Harriet Tarlo, or Thomas A. Clark as relevant contemporaries, while Tarlo’s trope of ‘radical pastoral’ chimes with the aesthetic in some of the ‘Nature’poetry here. The deployment of what used to be known as ‘typewriter wrestling’ is less extrovert than say, Caroline Bergvall or Maggie O’Sullivan, although Black’s use of ambiguous syntax and lack of punctuation (not a full stop in the book) is reminiscent in some ways of work by Presley, Robert Sheppard, and Adrian Clarke. If we turn to the book, we can see how some of these strategies work.

The opening poem, ‘She will advise her neighbours to plant aubrieta’ exemplifies one strand of the work here, which is gardening as a metaphor for living a life, where the poem’s subject

while the poem concludes

The next poem, ‘Ask how she is’ combines a banal/sincere enquiry, more gardening, and fractured narrative as emblematic of fractured or incomplete lives. At one point, we are told

Film Noir anyone? Unreliable narrator? Maybe, but put to other uses than some of the work we might be more familiar with. If we follow the poems through the book, we might be reminded of say, Dylan’s ‘All Along the Watchtower’ or Muldoon’s ‘Why Brownlee Left’ although Black’s work is more indeterminate and oblique than Muldoon, or Jo Shapcott, whose poems also have the tact to know where to stop. This sense of fractured lives or incomplete stories permeates the book, while some texts approach the status of cutups, another venerable post-Modernist procedure which remains surprisingly readable in the right hands. If there is a ‘narrative’ embedded in Black’s work, do we need to know, or can we just enjoy each poem for what it is? This reader says – Yes, we can. When we read the title of ‘She walks for days’ we might expect a pseudo-narrative involving a journey or quest of some sort, but the walking appears to take place ‘Up and down stairs‘ ; what this implies about the lives most people – especially women – endure, might be a Soap Opera if David Lynch was commissioned to direct one. Lives of quiet desperation indeed.

There is however, another major strand to Black’s work, one relevant to her praxis as a visual artist. Several pieces here take existing work as starting points, in what literary theorists used to call ‘inter-textuality’ claiming that all texts are made up (in more ways than one) of pre-existing texts. What this does for notions of ‘originality’ probably wouldn’t trouble Roland Barthes or Jacques Derrida too much, but in relation to recent squabbles (or scandals if you prefer) over plagiarism in our Poetry Parallel Universe, or in the real world, where ‘Intellectual Property‘ is big business, it matters. (American Universities are now instructing students that their essays must be absolutely original, and that paraphrasing say Harold Bloom or Helen Vendler is an offence that could get them kicked off their course). To be clear, Black’s use of acknowledged pre-existing texts from Gerard Manley Hopkins, John Ruskin, Elizabeth Bishop, and Virginia Woolf, is not plagiarism. Under current British copyright law, there is no copyright in ideas, only in stealing the exact form of words, and passing them off as your own original work. For my money, the texts generated by Black’s creative use of these already existing letters and diaries are some of the best on offer here.

‘The seven lamps’ is a sequence of 14 line poems, call them sonnets if you will, ‘after Ruskin’ which provokes the thought that re-reading Ruskin should be compulsory for politicians & bureaucrats. The first starts

and goes on in an effort to re-imagine our landscape and really see what we have done to our ecology. In ‘I know now what the tinkling brook knows’ (which is taken from the diaries of Gerard Manley Hopkins), close attention to the particularities of the landscape we think we inhabit, is on offer. Some of the peculiarities of Hopkins’ writings & rhythms are put to good use by Black here, an enjoyable performance, as is ‘This little stretch of life’, a poem in couplets constructed from the letters of Elizabeth Bishop. On this evidence, Bishop was a fine prose writer, and it is easy to see why she has been championed in recent years as a better & more interesting poet than say Robert Lowell. It may be that re-configuring these works provoked Black into saying something she didn’t know needed to be said.

What a gift in the form of raw material for any writer, and no doubt it was Black’s painterly eye that was instantly drawn to Bishop’s words, as in the case of Virginia Woolf’s diaries, which furnished the raw material put to use in ‘At the little deal table under the glare of the lamp’,another piece in couplets. Although the words were written into one of Woolf’s diaries, I believe they were also written by Woolf for eventual publication. This piece has a great deal about the business of literary or artistic creation, and the interior life of the artist. Woolf has been an important figure for women writers, and feminists generally; and the phrases utilised here make clear why this should be so. The opening phrase is

while later we find

and several couplets on, Black has Woolf say, or Woolf has Black say,

This brings up so many familiar questions – about the conditions of literary production, what it means to be a writer when patronage is in short supply, and in particular, how writers can achieve that room of their own, where they can write in security – that the purpose of this review, to alert the reader to the virtues of Black’s work, is in danger of being sidetracked. Let us therefore point the reader to another of those virtues, that of the humour in this book; Black’s work is not funny in the sense that say, Selima Hill is funny, but there is a modest, quietly spoken yet determined to be heard note which is often absent in some Modernist/ Post-Modernist work that sometimes takes itself too seriously.

This Woolfian construct is followed by what appears to be a sequence of ‘Nature’ poems, including ‘At the end’, another formal piece in quatrains which reads like an elegy. It concludes

Some of the following poems read as if they are cut ups from an unfinished novel, that has been put to better use, including ‘Plot’, ‘Further on’, ‘In no particular order’ and ‘From a previous life’. The book’s final poem, ‘a pit a gloom a stage a knot’ reads like the sort of prompt encountered on an Arvon Foundation course, where the tutor provides a list of words to be included in a piece of writing, or possibly another cut up where an innocent 19th century novel has been run through the shredder and selected strips painstakingly re-assembled. It starts

The text is in one block, but is more or less in rhyming couplets, is almost purely nominalist,and any narrative is less than implied, maybe not even a ghost in the machine. It is not however,voiceless, as so much Modern work is; this piece would work very well read aloud, demonstrating Black’s formal control over her material. If we want or need a poetry or writing that can survive re-reading and not simply be disposed of after being read once or twice, then perhaps Black’s work, if this view of her work is viable, is more valuable than any of the currently promoted or prize-winning examples that surface briefly in Waterstone’s then vanish.

One last note on literary theory/criticism: This is writing as autonomous objects, sent out into the world to fend for themselves, not in any ‘New Critical‘ sense (look it up), but as part of a notional part of whatever you conceive the ‘Modernist project‘ to be. Do these poems have something / anything in common with Abstract or Non-Representational Art? Is Black saying – ‘Look, this is what I have made, make of it what you will.’ This is not to imply that she is indifferent to the reception of her work, otherwise she would not have gone to the trouble, first of making the poems, then workshopping them, doing readings, & offering poems and books to whatever Reading Public might exist. If there is a Waterstone’s, or better still, an independent bookshop anywhere near you, make their day & buy this book.