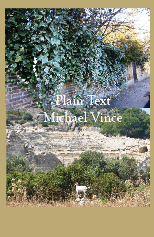 Michael Vince’s collection explores links between various North London locations (one assumes that is his area of residence) and the ancient world described by the Greek historian Herodotus, by juxtaposing a first section dominated by poems on the former – mainly set in Highgate and Archway – with a shorter second part dedicated to the latter. Many other places and epochs are also visited, such as St Albans through the eyes and brush of van Ruisdael, Ford Madox Ford’s dwelling in remote Provence, the 18th-century Venice of Francesco Guardi, and the Mosquito Coast of Honduras where Colonel Despard’s marriage to an ex-slave led to his execution in 1803 at the hands of a British establishment supposedly committed to Abolition. The ever-changing landscape, always evocatively and feelingly depicted by Vince, makes this a rich and intriguing poetic journey.

A central theme is the erosive effect of time, and the spirit of Shelley’s ‘Ozymandias’ hangs over many of Vince’s ruminations, never more directly than in the opening poem of the second section, entitled ‘A Visit’. What has happened to this place? asks the speaker, a vainglorious king visiting the ruins of a once eminent city, who needs to consult his librarian in order to verify the historical details. The librarian informs him that the name / … of this barren empty hill / was one that all men trembled at, / and its kings….ruled as far as that trembling blur / over there, the sea. The king reflects on the fact that all that has now been erased, including the names of both the kings and the city, and the place is now observed only by vultures, before reaching a realisation and a sense of perspective that eluded Ozymandias/Rameses:

There is a nice irony in the thematic parallel with the opening piece in the first section, which views time’s obliterations from a very different angle. ‘Brides in the Bath’ recalls the notorious murders of the early twentieth century, in a local street that has since been renamed. Its long lines and mellifluous rhythms typify Vince’s style for much of the book as he concludes the poem with a characteristic compassion that extends even to the doomed murderer:

The final line introduces another key theme, the power of myth and illusion. Dick Whittington later has a poem dedicated entirely to him, and it bookends the first section by coming right at the end. Vince appears to be suggesting that he sees history, at least in part, as a pantomime, or perhaps he merely means that even great historians like Herodotus, like more modern practitioners of the Simon Schama ilk, are subject to commercial pressures which tend to result in melodrama and exaggeration rather than a genuine attempt at objectivity. If so, Vince does not seem to regard that as an entirely bad thing because myths and fables, though arguably by their nature pantomimic to some extent, can produce great stories, and in this case memorable poems based on them.

For instance, ‘The Fish’ fluently and compellingly relates the tale of Polycrates, tyrant of Samos in the sixth century BC, who was urged by the Pharaoh Amasis to throw away whatever he held most dear, in order to escape a reversal of his hitherto excellent fortune. By a not so simple twist of fate the jewel-encrusted gold ring he flings into the sea is swallowed by a huge fish, which is in turn caught by a fisherman, who decides to give it to Polycrates as a gift – a weird form of boomerang effect that ensures the tyrant does indeed suffer a serious reverse. Still more engaging is the final poem in the book, ‘The Thief’, which recounts the story of Rhampsinitus, greedy king of Egypt, who ended up rewarding a clever young man, despite and indeed because of the fact that he succeeded in robbing his strong-room of treasures, by marrying him to his daughter.

At times Vince’s generally wordy style, which he uses to excellent effect in the narrative poems, spills over into such inedible mouthfuls as The heat necessitated abstemious meals (‘A Foodie, Fordie’), and the genitive overload of time’s walls’ palimpsest (‘Toys’). An otherwise witty and striking poem about a dog called Bonkers closes with the far from felicitous final line: the extent of human and canine restlessness… However, at its best the elucidative approach offers more benefits than mere storytelling fluency. The end of ‘A Foodie, Fordie’ celebrates the writer’s culinary enthusiasm and hospitality by picturing him awaiting arrivals at his home on the slopes of Provence, but also enacts the protracted exertions of the journey there:

Nonetheless, I found some of the best poems to be the more tersely written. ‘Reading the Ancients’, for example, has an impressive and arresting intensity of focus. Here Vince’s enactment of the effort of climbing has a sinuous muscularity:

And to my mind the most stunning poem of all, ‘Lost Daughter’, is an elegy to a stillborn child that savoured strongly of Larkin, particularly in the repeated negatives that echoed ‘I Remember, I Remember’. Unlike Larkin’s childhood, though, where the negation enshrines an uneventfulness grounded in tedium, in Vince’s case it laments a life dramatically and tragically cut short at its outset:

If I were to venture a recommendation for Vince’s future writing, it would be that he pursue the less prolix path alongside what seems his ‘default’ expository style, even more than he has done in this thought-provoking and moving collection. Less can very definitely be more.