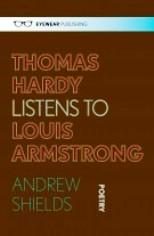 The title poem of Thomas Hardy Listens to Louis Armstrong tells us quite a bit about the book and its author, Andrew Shields. Shields is a teacher of English and also a musician and so the poem’s two protagonists reflect two sides of his creative nature. The poem also reveals the poet’s interest in possibilities. Hardy dies in 1929 and Armstrong’s first recordings were made in 1925 and so it is possible to speculate that the former was able to hear an example of the latter’s music. Shields is happy to take this speculation as a starting point and to imagine Hardy hearing brazen song, full-hearted, taking up // caresome things and making them carefree which at the same time had an under-echo of what he’d played / at fairs and weddings, for the dancers.

The title poem actually appears quite late in the book, by which time readers may well have drawn their own conclusions about the poet’s style and motivations. The first poem ‘Hatter’ straightaway demonstrates his fondness for rhyme, iambic rhythms and verbal dexterity. It would make a good performance piece, based as it is around finding as many rhymes as possible for the chorus line He’s a man of many hats. Thus

This light-hearted opening poem also enables Shields to indulge his fondness for dropping the names of famous jazz musicians. There are five passing references in the first four lines of ‘Hatter’; but a much more substantial engagement with music comes a little further on in ‘Monk’s Dream’:

(These atmospheric lines more than compensate for a certain prosey-ness in the poem’s opening couplet How many notes are drifting through the air? (More than two hands would still not count them all.))

Music also appears in the form of quotes from songs, notably in ‘Your Mileage May Vary’ where every other line is borrowed from popular music of the 1970s. The book also features entire song lyrics composed by Shields himself (and in some cases recorded by his own band – although, sadly, a sample CD is not included!). These lyrics are identified in the notes; but would probably be easily recognised in any case by virtue of their end-stopped lines and a repeated refrain or chorus. It is, I think, fair to say that these lyrics seem to need the support of the missing melody; taken simply as poems, they seem relatively lightweight compared with some of the best pieces in the collection.

For me, what Shields does best is to construct poems of a dreamlike nature in which we seem to overhear other people’s thoughts or pick up scraps from messages or whispers of conspiracy. There are many quotable examples. ‘Nuthatch’ begins with mention of a paper found in a tree and

‘Verses’ includes a favourite image of marks on wooden surfaces:

If scratchings occur quite frequently (including, for instance, the sound of a stylus on a record) so too do attic locations. One of these is found in ‘January Sixth’ where Shields manages to combine haunting memories with quite precise observation in the present moment:

Tightly descriptive clauses are also used to good effect to set the scene for ‘Happening’:

This is a lively and varied collection. There are several longish pieces like ‘Hatter’, ‘Your Mileage May Vary’ and ‘The Seating Plan’ which seem very suitable for performance (as of course do the song lyrics). Besides the title poem there are further dips into the hypotheticals of history as in ‘The Last D’Athée’s Complaint’; and we have already quoted from some of the enigmatic narrative poems like ‘Nuthatch’ and ‘Dirty Hands’. In most of these, however, there is a sense of theatricality and enjoyment of language which prevents us from being too alarmed about any darkness in the stories that are hinted at. It comes as a surprise therefore when the versatile Mr Shields presents us with ‘Pipe Smoke’, a bleakly straightforward family history told in ballad form.

Shields succeeds in a good deal of what he attempts in this collection; and the last line of the last poem is itself a fitting comment on a book whose verses did what verses mean to do.

.
Thomas Ovans is NOT (as some google searches might suggest) a Nashville-based, Boston-raised street rocker. Instead he lives in London and has a background in technical writing and editing. He is also a regular reviewer for London Grip. His own poems have appeared most recently on Ink Sweat & Tears and The Stare’s Nest.