For a few fragile years from the end of the 19th century until the outbreak of World War I, Brussels was aesthetically and geographically at the centre of a glorious new style of architecture – fluid, sensual and highly stylised.

It began in London and swept across the continent to Germany, where it became Jugendstil.   En route, in Brussels, art nouveau found its most complete expression in the architecture of Victor Horta (1861-1947).

Brussels tourist authorities rightly devote as much time to promoting the architectural imprint Horta left behind as they do to beer and chocolate.

Visitors can follow art nouveau walks to pick out the fabulous facades tucked away in otherwise unlovely streets and tour the Horta house museum, where the architect lived and worked surrounded by loving attention to detail.

Now in a new and satisfying twist to the art nouveau experience, Brussels’ Musees Royaux des Beaux Arts has devoted a huge new “Fin-de-Siecle” section, a museum in itself, to the artistic context in which Horta thrived.

Although focused on painting, it touches on music, opera and decorative arts.  The tour ends with a collection of furniture and interior decoration, including chairs, a door, an artist’s easel and a fireplace designed by Horta.  All embody the designer’s utterly consistent intellectual elegance, which combines ornament with restraint.

Most of the paintings on display had been languishing in storage, while Belgium’s most famous painter Rene Magritte (1898-1967) has for the past four years had a museum all to himself, also as part of the Beaux Arts museums complex.

In the ferment of what was still a relatively young country (modern Belgium dates back only to 1830), a reaction against traditional painting worked its way through realistic interpretations of peasant work – in the countryside and the newly industrialised cities – and then through impressionism, symbolism and modernism.

To focus on the latter, Ensor, Spilliaert and Khnopff are on the whole highly distinct from one other.

Ensor was born to an English father and Belgian mother in Ostend.  Apart from a period studying in Brussels and one or two very tentative trips abroad, he lived all his life in Ostend, setting up his studio in the family home, where his parents ran one of their chain of souvenir and curiosity shops.   Amongst other things, they sold the carnival masks that played a major role in Ensor’s artistic output.

Spilliaert was also born in Ostend.  Son of a perfumer to the court of Belgian’s King Leopold II, he was largely-self taught.

Khnopff, by contrast with the middle-class Spilliaert and Ensor, came from an aristocratic family, which had lived in Flanders for centuries.  He was destined for a legal career, but lost interest in law studies and later enrolled at Belgium’s Academie Royale des Beaux Arts, where Ensor was also a student.

The two did not get on.  The closest they get to overlap is in works that led Ensor to accuse Khnopff of plagiarism and to his breaking off all ties with him.

In the early 1880s, during his dark period, Ensor painted a work entitled “Russian Music” – a study of an oppressive, muffled, middle class interior, as the museum commentary puts it.  A man is listening, apparently calmly, to a woman playing the piano.  Khnopff’s “Listening to Schumann” in contrast depicts a woman, head-in-hand, listening with great emotion to a man playing the piano, although we only see his hand and cuff.  For Ensor, it was a clear case of copying.

The other works of the two painters could hardly be more different.

A rich collection of Ensor’s works includes realistic studies of “The Drunks”, “The Smoker”, “The Lamp Lighter”, all quintessential figures, rooted to the earth in heavy wooden, working class clogs.  He also depicted his parents – his father reading intently, his mother staring wistfully into the middle distance.

Ensor then abandons straight portraits and embarks on his obsession with characters wearing Venetian Carnival-style masks that instantly parody the wearers.  He also gives us a world of unforgiving satire, such as “The Bad Doctors”, tangled in yards of intestine from their unfortunate patient, and his famous “Skeletons Fighting over a Herring”.

The skeletons are a metaphor for the art critics detested by Ensor and their fight over a miserable herring is a pun, referring to their scrapping over his art.  The French for smoked herring is hareng-saur, pronounced similarly to art-Ensor.

The Khnopff on display includes his most famous “The Caresses”, showing a sphinx with a powerful leopard body and a sensual paw stroking a classically beautiful youth.  The face on the sphinx recalls Khnopff’s sister Marguerite, who features throughout his work.

She also appears in Memories or Lawn Tennis – where all the players have her face – and as the angelic woman in white, entitled Silence.

Spilliaert’s painting takes us from symbolism to modernism.

“The Bather” and “The Woman on the Train” show lonely figures, blended stylishly into their backgrounds.

A self-portrait exudes existential anxiety as the eyes are painted to evoke the empty sockets of a skull.  Like the vast majority of the paintings in this powerful exhibition from which there are no simple conclusions to be drawn, it leaves us with a fin-de-siecle melancholy that contrasts with the optimism of art nouveau, which World War I brought to an abrupt end. 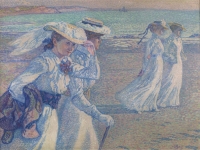 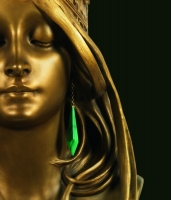 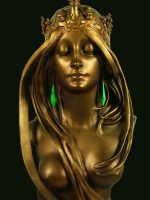 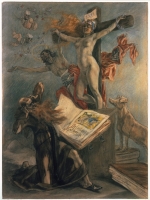 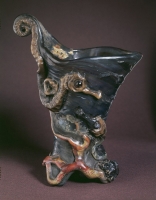 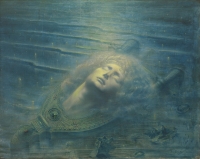 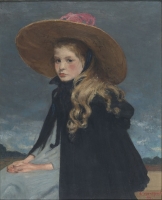 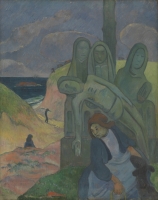 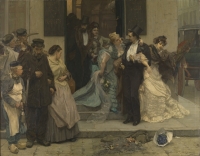 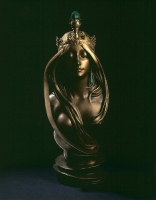 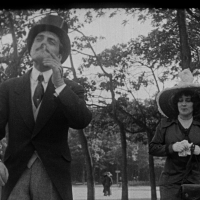 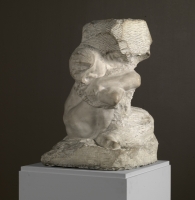 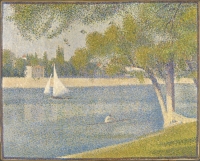 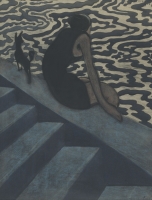