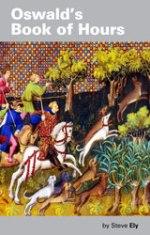 Steve Ely does not go out of his way to make life easy for his readers in his collection Oswald’s Book of Hours which was shortlisted for the Forward Prize.  Some of the poems he chose to read at the event on the night before the prize-giving were, as it happens, quite accessible to me because I am accustomed to other writings about St Paul and the Archangel Michael.  But while these subjects may be only mildly unfamiliar to potential readers, Ely’s poetry about mediaeval soldiery or contemporary hunting with dogs will surely be much less congenial to a London metropolitan audience – especially when it is partly shaped by Catholic liturgy and partly couched in Middle English.  This is poetry which takes a big risk of alienating its readers by making few concessions to fashionable ideas.

One of Ely’s concerns seems to be to show us the brutality which lies just below the thin surface of civilisation as we think we know it.  He reminds us that we can be thoughtlessly accepting of the privileges others have had to fight for and that we can be all-too ready to shelter behind the armies which we affect to disapprove of when things seem peaceful. The book opens with a lengthy justification of the huntsman’s calling and plunges us straight into vigorous language that refuses to be pinned down in a single period.  The narrator – presumably a nobleman – tells how i leapt from my mount …/ … to drive home the barbed iron / in a tumult of pigshriek; and as he continues in this vein he also claims repeatedly it is no synne.  And by the end of this poem a second theme has emerged – namely the rights and freedoms of the “low-born” Englishman.  When poachers are caught in the act

…the boldest saith ‘sir, it is no synne for an englisc-manne
to take a deer from his own landis forest’
and I could not fault him…

The ideology implicit in this fragment is seldom far below the surface of the poems; indeed the collection’s back-cover manifesto declares it to be “an attempt to rehabilitate an organic English identity” (with the Northumbrian King Oswald as a candidate for patron saint).  I would suggest that the addition of the words ‘proud’ and ‘self-sufficient’ before and after ‘English’ would better convey the thrust of the poetry.

The collection is peopled with a rich cast of real-life characters both from history and from the present day.  Some will be quite familiar – Wat Tyler and Arthur Scargill for instance – while others may send some of us to Wikipaedia for further explanation.  Many of the characters are allowed to speak for themselves in a rich mix of ancient and modern colloquialisms.  Wat Tyler scorns the divine right tyrant propped up by a cabal of mammonite murderers, summing them up as ‘King Richard and the true commons’ my arse.  The brigand John Nevison tells his story via a sequence of splendidly irreverent confessions to priests up and down the country. The first of these begins most unliturgically with Shut up and listen.  Even Biblical characters are not handled with kid gloves: Joseph, the husband of Mary, is described as a beard for the Virgin who is written out of the script by chapter three.

Ely’s wonderfully original imagination does sometimes sacrifice the clarity which is evident in the preceding examples.  This can happen when both the language becomes too tangled and also too much is assumed about the reader’s knowledge of context.  In ‘Patris Sapienta’, which retells the Robin Hood legend, we are faced with four quite difficult pages from which the following extract is fairly typical.

ic geseah on swefne a manne
of our cynne, blinded of eie
and lopped of foot, in beggary
at my skel on watlynge street.
and he cwaeth , against the vert
and venison of the French king’s
forest have I synned….

Here it seems we must choose between translation (which is of course possible with a little thought) and letting the sounds wash over us (while perhaps stumbling over pronunciation).

I can forgive such occasional difficulties however because of the refreshingly straightforward vigour in so many of the pieces.  I enjoy the rough and unsentimental inclusion of animals as part of everyday life

She whelped in the front room in a basket
by the hearth. The telly was on in the corner.
Good Morning Sports Fans. The lad flipped
it to SpongeBob, then went to do his papers.
She was done by the time he was back.

I am also pleased to have found out what a ‘drenched Jack Pyke’ is.  And I warm to Ely’s authentic portrayal of a Yorkshireman’s undemonstrative greeting with a grin / and a “nah then lad”, making a fuss of the dogs.

I said earlier that Ely takes a risk in making his collection so uncompromisingly original as to court the dreaded label ‘politically incorrect’.  But in fact it could be said that he asks the reader to take a risk and be immersed in an unusual language and worldview.  The immersion will be a shock and the subsequent swim will at times be difficult.  But one should expect to emerge invigorated.