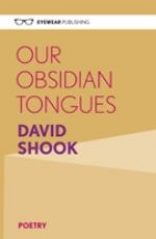 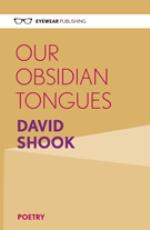 This debut poetry collection from David Shook is a terrific read. The Los Angeles-based Salvador Dali-look-alike is a filmmaker, a translator of Victor Terán’s poetry from the Zapotec language of Mexico, a ‘student of endangered languages’, and now, a noteworthy poet.

If one thinks of Dali’s melted watches, man birthed from an egg-shaped world, the lobster telephone – surreal montages, with each image sharply defined – then one recognizes how Shook evokes that same artistry with tough, unapologetic and passionate language. Several themes are interwoven: He offers stream-of-consciousness essays on useful but menacing instruments (tooth-picks, pins, needles). He delivers the songs of one Silvestre Adán in the role of carpenter, farmer, street artist, orchardist, and morning singer. And there are fictive letters back home from Mexican immigrants – perhaps illegal – working on American farms and abattoirs, voicing bitterness and despair. One letter is a ransom note – a drug deal gone wrong? – sent with the lopped off ear of a kidnapped teenage boy and a videotape of the carnage. Eighty thousand by/ Monday or he’s dead.

Shook also invokes Aztec customs and cruel offerings: In ‘Sacrificing Chickens to the Lake Before Corn Season’ the drowning of a rooster, a cinder block or brick tied to its leg or neck, is done with sadistic pleasure: We stoned & bricked the bird until it sank. And unsentimentally here: The sun rises each morning without human sacrifice./ The misery of the city is enough.

Shook reminds us of the violence in Los Angeles in an untitled poem:

Below there are policemen, shoe shines, nurses, dwarves, muggers.
Flames leap from windows & the sirens shriek proclaims
the lordship of violence.

Here on the tenth floor we dead walk with suspicion, distressed,
alert, they won’t kill us again.

As the book’s title foretells, there is a Dali-esque obsession with tongues. In the title poem, Our tongues are/ obsidian tongues, shorter than/ the knives priests used to sacrifice/ but equally sharp. In fragments of poems a rich banker examines his [lying] tongue; and A woman with thrush tongue-kisses/ a man without thrush [sic].

Here I should mention my only cavil with the collection: there are some fifteen pages with such untitled fragments, some as short as five words. Those pages look bare, a wasteland of white space. One page just shows sketches of the Spanish and English question marks. I would have preferred many of these to be coalesced, with other worthy poems added to make up the requisite 60+ pages of a standard collection.

Shook’s writes in short, sharp lines, depending little on rhyme or meter, but on the potency of nouns and verbs. He also uses the technique made popular by Sharon Olds of placing an article at the end of a line so to allow the next line’s first word to explode. This style is demonstrated in the poem ‘The Rest of the Cow’:

Its body in the butcher shop, its
tongue too. Its mouth an empty
home papered in cud.
The butcher’s dog will eat
its heart, relish its saltiness, the
heart that beat like a trout
fresh on the floor of a boat
as the knife approached its neck.
Which of its seven stomachs
tensed first, which will make
the least bitter stew?

Shook evokes the Aztec ancestry of Mexicans to compare with their degraded state today. In ‘Fourth Tenochtitlan’ we understand how the greatness of that Aztec City and the entire empire has degenerated:

The condors have their cage
barred with volcanic peaks
they feed themselves the carrion
that litters the streets: dog meat,
goat meat, chickens & hares
sacrificed to the rich to the
tires of cars discarded.

Shook shows a sharp-tongued humour as well. In a wonderful ghazal describing the candidates in an ugliest-dog-pageant (‘Mutt Ghazal’), he nominates himself in the final couplet:

you wanna win? David’s the same as you. He spends his days loitering online,
scribbling poems. Forget world peace – money is the way to go, dog.

Something tells me not to believe him.