In her latest collection, Waiting for Bluebeard, Helen Ivory invites her readers into a world where fantasy can sometimes become disturbingly real. 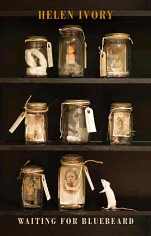 Helen Ivory’s new collection Waiting for Bluebeard is an unsettling book – as, presumably, it was intended to be.  The poems use mostly short, crisp lines to convey a sense of isolation and confinement and to hint obliquely that worse horrors may lie just beyond the text.  The first, longer, part of the book presents impressions from what the author calls “a part-remembered part-imagined childhood”; and the second part contains a sequence of snapshot despatches from within the corridors and hallways of Bluebeard’s house.

The book begins with a pregnant mother, whose suitcase has been packed for days, watching televised images of astronauts playing tricks on gravity above the moon’s surface; and the next poem combines these images in sinister fashion with the mention of a baby in a bell jar / like a cosmonaut testing space.  Thus two of the book’s recurring themes – a sense of waiting in a limbo-like state and rumours about missing or unborn children – are introduced immediately: and the skilful sustaining of such themes helps to give the collection its strength and coherence.  A persistent air of secrecy is enhanced by the distinctive way that the poems release information one drop at a time – for instance:

When my sister was born
the cat had kittens too;
blind, shaky, seeming
not quite set on this world.
(‘The Stolen Babies’);

My father was a shadow
who stood at the school gates
fresh from the factory
where he’d pieced cars together all night.
(‘Night shift’).

These two extracts seem to catch authentic memories – and the same is true of ‘Playing House’, describing a little girl’s solitary games with her dolls, and ‘Quarantine’ where a childhood ailment results in skin blotched with calamine.  Other poems are clearly fantasies.  ‘Chameleon’ involves the bizarre conceit that My mother kept a chameleon … it did the job of passing notes to my father.   But when we learn that The quickness of its eyes meant he never got away and that the message would always come with the clatter of pans from down the hall or the angry whiz of a blender we may also catch an underlying sense of real-life domestic tension.

Elsewhere, the uneasiness of childhood is handled more obliquely.  We learn about skeletons of small animals – goldfish, birds, kittens – buried in the garden; and these frequent funerals seem to echo an unspoken concern for siblings who may (or may not) be missing.  (Indeed even the non-missing children can sometimes appear quite insubstantial: a mother decides her girls will stand hand in hand cut from the same piece of paper.)  Domestic anxiety also extends beyond people and animals: at times the moon and stars want to gain admittance to the house; and even the sky itself could easily have fallen in / according to the chicken in the tale.

There is initially something a little abrupt about the transition from the partly-realistic childhood section to the poems set in the fantastic location of Bluebeard’s house.   But connections between the two parts of the book quickly become apparent.  Bluebeard quarrying with pick and shovel / waist deep in Dog’s grave recalls all the garden-buried animals in the first section.  And when we learn that, in Bluebeard’s garden,

Some are only buried waist-deep
and from a distance
they are trees holding hands.

we are reminded of those sisters hand in hand cut from the same piece of paper.  Cut-out patterns and dressmaking accessories continue to make appearances.  In ‘Bluebeard’s Letters’

The stories of course, had been fixed
in her head by dress-makers’ pins
since she was a girl, …

My father made me a dress
from the light of the moon
pinned into place.

At first, these mentions of ‘My father’ may recall the extract from ‘Night Shift’, quoted above.  More chilling, however, are the potential resonances between the lines from ‘Night Shift’ and those in ‘Wednesday is Market Day’ where Bluebeard takes pigs to market and watches over / their sleepwalk to the slaughterhouse / like a stepfather at the school gates.  What to make of these resonances becomes a matter for the reader’s own imagination.

Clearly, Waiting for Bluebeard is not an easy book.  The poems are dark and sometimes, frankly, puzzling.  In fact, their periodic references to cutting-out and the difficulty of re-joining divided halves make me want to compare the book to a well crafted jigsaw.  Some parts – for instance, the grandmother poems or the quasi-diary entries of ‘A Week with Bluebeard’ – have the reassuring feel of edge pieces which can provide a frame for others that are harder to identify and categorize.  I can’t yet pretend to have “solved” it all, as may be all-too-clear from some of the conjectures in the foregoing paragraphs.  But it has been intriguing and rewarding to handle these poems, examine them from new angles and let the interlocking subtleties of the collection reveal themselves bit by bit.