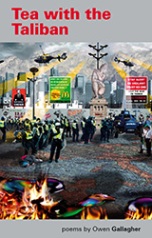 Two recent collections: Tea with the Taliban by Owen Gallagher & The Exile’s House by Ian Parks. 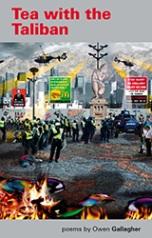 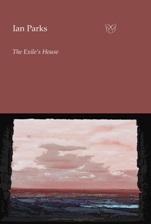 Ian Parks and Owen Gallagher are both narrative poets who sometimes explore similar themes.  Gallagher, however, tends to keep his poetic stories fairly straightforward and event-driven while Parks has more of a taste for the mysterious and elusive.  Both poets are also “political”. Gallagher often writes quite specifically about contemporary issues but Parks prefers – with certain significant exceptions –  to make more oblique and generalised observations.

Tea with the Taliban begins and ends with poetic tributes to Democracy.  Initially it is praised for its robust work ethic – It never applies for a sick-note.; but by the end of the collection we are offered the less optimistic observation that Democracy was a fine idea.  One might ask what has occurred in the intervening fifty-or-so pages to cause disillusionment.   One problem is that Gallagher finds Democracy is not the only political philosophy or “–ism” to be industriously at work in the world.  Capitalism, too, is a grafter that never takes breaks; and Ageism is an exemplary worker and would never … consider a pension plan.   This rather consistent – even repetitive – pattern of negative thinking is only partly offset by the example of the employee at the Happiness Factory who will work all shifts, never complain.

Alongside the Happiness Factory, Gallagher offers other, frequently pessimistic, fantasies.  These include a Land Rush on other planets; an auction of items ranging from bodily organs to the whole African continent; and the establishment of a Ministry of Poetry!   But, for me, his work is most successful when it does not tackle large and abstract ideas head-on but works through the personal and particular.  It is a more telling insight into shortcomings of democracy when Gallagher imagines a cleaner working late at night in the House of Commons:  Hunched / in the Prime Minister’s place I rehearse how I’ll inform / my wife of my redundancy.

Gallagher works at this more specific level in a strong sequence set in Iraq and Afghanistan.  The book’s title poem illustrates the paradoxes and contradictions of the alleged quest for hearts and minds:

We offered cigarettes, left refreshed.
That night we were ordered
to raid the house.

He also succeeds in conveying the chaos of conflict as perceived by a single combatant:

And he deals equally well with conflict’s after-effects on individuals:

My father’s mind is full of land-mines,
his finger jerks an imaginary trigger.

He also reminds us of what we sometimes fail to see for ourselves:

The streets of London are paved with ex-soldiers
…
in hand to hand combat with themselves.

(It is only a pity that the prosily factual line from the Falklands to Afghanistan is interpolated into this powerful couplet.)

Another group of poems presents us with (a version of) the poet’s family background – from which politics was by no means absent.  We learn of Uncle Hugh’s mischievous notion about the Pope and Saint Marx: One was to assist us / into Heaven, the other to enable us to take what we were due / on Earth.  The issue of What was Due to Whom is also addressed memorably in a poem which considers the callers who came to claim a share of the family’s weekly wage packet:

The first man was from a loan company.
No words were exchanged.  He was with someone
who looked like ‘The Hulk’.  We included him
in our prayers.   The second man was a priest.
God was his minder.  Purses and wallets opened
for him like the sea for Moses.

As well as grouping his poems by theme, Gallagher sometimes likes to link them by a teasing repetition of a key word from one poem to the next.  But some of his best work in this collection stands out for me as all the more vivid for being isolated rather than part of a series-with-a-purpose.   ‘On Trotsky’s Anniversary’ , for instance, connects, in twelve tight lines, the violence of murder, its red … seeping upwards onto Stalin’s hands, with the narrator’s own privately forceful reaction when his unfaithful wife’s hand / greets another’s under our table.   In ‘The Good Samaritan’ an easily overlooked detail in the first few lines comes back as the key to a shocking ending.  And there is another startling ending in the wryly noir payoff to ‘Evidence for a Divorce’.

This is an enjoyable collection with pleasingly frequent high spots.  However this reviewer’s inner pedant feels compelled to point out that in ‘The Dark Stuff’ a mention of the discovery of a hidden gun horde is either a clever pun or a typo!

In The Exile’s House  it is not only the title poem which is concerned with a life on the margins.  Parks also writes about people and events at The End of the Road or Out in the Bay or in a Late Night Hotel where The pianist has given up / on everyone but me.  He even ventures completely Off the Map where he finds a girl waiting for a train

to rush her through the flatlands,
past fields of oil-seed rape

where promise keeps receding
to these backwater towns
at the end of the line
that offer no escape.

(Although Parks only makes occasional use of rhyme he can do so most effectively, as in the closing lines of these two stanzas.)

Parks’ taste for the dislocated is matched with a fondness for writing about the haunting loneliness of persistent disappointment:  In Athens where we never met / except inside a dream; or She dreams in her own language / the state she can’t go back to.  In some of these poems, the protagonists find themselves isolated and disappointed because of events beyond their control; but Parks does not always deal with specifically documented injustices in the way that Gallagher does.  Thus, while  ‘Out in the Bay’ can certainly be taken as a reference to the deaths of a group of cockle-pickers off Blackpool , the poem also works as a generalised lament for the lot of all transients, aliens, immigrants.  And even when a poem does seem to be based on a particular person or event, Parks does not always provide relevant background information.  It is perhaps not difficult to identify T.E. Lawrence in the poem ‘Clouds Hill’; but even though I “got” that one, I wonder if there are others where I may have missed part of the point!

In contrast to the preceding remarks, Parks does choose to write very specifically and explicitly about events surrounding the 1980’s miners’ strike.  ‘The Incident’ is a totally personal narrative about a picket-line clash.  After a “mishap” to a police van

to catch a gloved fist in my face

‘Orgreave’ ties one particularly notorious event to the wider sweep of English history:

helmets in the sunlight, push of pike,
a trampling down by horses in the mire.
Except this was high summer

and the middle of the strike,
the shields not steel but Perspex
driving back the miners

(where again we see a single, telling rhyme across the stanzas).   But amid the strife of industrial dispute we are shown something softer.  The idle months drew … a new found tenderness from the striking miners and so they

… crossed the fields
to where the old pit ponies
were at grass
to whisper to them,

Parks, like Gallagher, also offers family stories and memories – for instance, his mother seeming to call him from the far side of a diverted river.  He also reflects on the hardships that some of them had to survive.  His grandfather was wounded on the Somme but wrote no poems about it – this “omission” seeming almost a rebuke to a generation which has not had to go to war but which does sometimes write on the subject, having inherited the freckle on his trigger hand / which he passed on to mine.  (Interestingly, the richness of the poem ‘Grandfather’, reflecting an entire life of someone known to the poet, is in rather marked contrast to a more pedestrian poem about Rosa Parks which has to centre on the single incident that made her famous.)  Parks also dips, perhaps unfashionably, into the Bible for the backgrounds to intriguing poems like ‘Lazarus’ and ‘The Occupation’.

Having mentioned Parks’ intermittent uses of rhyme, I am also interested in his ways with poetic rhythms.   In several of the poems he lets the reader’s ear become accustomed to an easy lilting pace which he then briefly breaks with several much more clipped lines.  One can sometimes argue a dramatic reason for this – as in the first part of a short sequence called ‘The Icon and the City’ where it introduces the narrator as a sudden interloper.  But elsewhere, as in ‘Sledge’, it seems only to inject a rather prosey feel:

Strange how things outlast us
as they too

outlast the limits
of their usefulness.

This last small quibble aside, The Exile’s House is a book that contains a generous helping of good poetry, ranging over themes and styles more varied than I have itemized here.   Both books in fact are to be commended for seeking to engage with a good deal of human activity in quite concrete terms and striving for vivid and colourful language, rather than merely playing with underlying ideas in some detached and quasi-academic way.