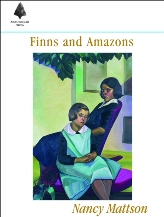 that moment in a room of strangers
when….

So starts ‘Simultaneity I’, the first poem in this multi-faceted collection.  In describing a Pandora’s box of memory and association, the surprise and sense of connection here mirrors the nature of the book.  This is a body of work both thematically cohesive and rich in formal and narrative variety, a book I’ve found it easy to enjoy but hard to review – the closer you read the more there is to consider.

Nancy Mattson is a Canadian of Finnish extraction who now lives in London.  Identity and belonging have been key themes in her previous work and here she expands on them.  The core focus is not so much Canada as Karelia, the border area between Russia and Finland, and the fate of a great aunt, Lisi Hirvonen, who left Canada for Karelia to join in the building of a communist utopia  there.  In this personal mission following the trail laid by a bundle of Lisi’s letters to her sister, the poet fills the gaps in specific knowledge and direct experience by research, imagination and empathy. The result is a book which pulls together the threads linking the generation of early C20th with the present.

The poet’s enthusiasm and need to include the reader is evident in the introduction and explanatory notes.  Although the actual undertaking is personal, the treatment of the subject matter makes it universal as, across the four separate sections of the book (sections which sometimes over-lap and often talk to one another) she weaves her tapestry.  This is a book best read through sequentially at first, after which any amount of revisiting will reward, both for the writing itself and the assimilation of history.

At the outset the poet imagines her great aunt Lisi as the child subject of an early C20th painting of a rural Finnish girl.  There is a nice symmetry here, in that the final poem of the book has the poet seeing herself in an old photo of a Soviet girl.  The rest of this initial section, playfully titled ‘Return to the Avant-garde’, focuses on the world of early C20th Russian artists, and a particular group of women, the Amazons of the book’s title.  Nancy Mattson’s enthusiasm for and engagement with the art of this era and her sympathy with the characters gives us vivid poems about their lives and pre-occupations.  ‘Boxers at an Exhibition’ describes a fist fight between two male artists at an exhibition, a poem which really mixes it, starting:

In the materialist corner
we have Tatlin the slapdash
wearing red constructivist shorts.

and later, in the same poem, we meet Alexandra Exter, who

prises them apart. The crowd boos
but her oxblood pumps claim the floor
with a blinding shine.

‘Translation squeezes meaning out of blood.’ opens the second section, ‘Loss’, in which the underlying quest of the book emerges more clearly.  Both Lisi and her sister, the poet’s grandmother, appear in poems exploring language, identity and belonging.  A poem about learning to pronounce a Cyrillic character manages to weave its way deftly and movingly towards an evocation of the lost Lisi.  And we are introduced to the problem of interpreting the past, the turbulence of Soviet Russia under Stalin and the contradictions of an ideologically doctored version of history.  How is one to find an imagined truth amongst all this:

Draw the steam iron over stalinist wrinkles, cover
sagging sofas of gulag survivors with velvet upholstery
Unpick and restitch the dangling bits of history, or snip them
clean off
(‘House and Garden Tips’)

In ‘Parsing the Ancestors’, she evokes, among others, Tsvetaeva and Akhmatova to seek a true version of their times, but they cannot help and she ends up lamenting her own incapacity to be objective:  I’m the one who altogether refuses Marx / but has an ignorant soft spot for Trotsky.

Two pages on she opens with:

Be prepared to fail, to unexpect
what gets you in the end.
The kaleidoscope’s whirl
is full of empty glitter….
(‘Fields of Vision’)

The third section, ‘Letters’, focuses on the great aunt Lisi’s return to Karelia, and her fate pieced together and extrapolated from her letters.  It was like leaving Eden for the hope of Eden, / this journey from new world to utopia.

The text of some of the actual letters is included throughout this section. As documentation they have a strong and authentic presence.  Accompanying poems paraphrase, expand and comment on them, illuminating what is not said, alluding to historical realities, and revealing the poet’s own attempts to understand and accommodate this distant relative.

Call me a capitalist rat. I’ve inherited your eye.
Call me an enemy hare. Even so we’re blood.
(‘Belated Answer to a 1933 Letter, Believed Lost’)

In some places, however, where the accompanying poems paraphrase the letters, the unpunctuated rawness of the letters can work against the polish of the poem.

There is something heartbreaking about the optimism of the early letters when set against the backdrop of what we now know about Stalinist Russia.  The poems pick up on the underlying doubts and struggle, the hard life where  the women run on needles/ the men walk on knife blades.  Stalinist Russia, the official ideology, the disillusion, the censorship, the arbitrary purges, the knack of survival – The trick is to keep a straight face when everyone’s laughing – all this hangs over the unknown fate of Lisi.

While ‘Letters’ tightens its grip on the narrative of the book, the final section, ‘Legacy’, is for me the most affecting.  Here, as in the section ‘Loss’, we are frequently dealing with the poet herself, her reactions and reflections on her journey.  Early C20th meets the present.  Emotion and reason work together, stock is taken, limitations accepted:

And we’re reminded there’s a price to pay for opening yourself up to history:

My bedclothes twist, the struggle lasts all night
I wake exhausted, ropes of sleep limp in the light.
(‘Karelian Pillows’)

While the overall narrative of this collection is a serious matter, the writing is lively and inventive. Strong imagery, play, irony can be found amongst thoughtful and open-hearted writing.  Although not afraid of formal contrivance, the tone throughout is authentic.  That this has been a real journey of discovery for the poet is conveyed by the energy of the poems as they come off the page.

Mike Barlow won the National Poetry Competition in 2006. He has published three collections, the first of which Living on the Difference (Smith/Doorstop) was short-listed for the Jerwood Aldeburgh prize. A pamphlet, Amicable Numbers (Templar 2008) was a Poetry Book Society pamphlet choice.  His latest collection Charmed Lives was published by Smith/Doorstop in spring 2012.