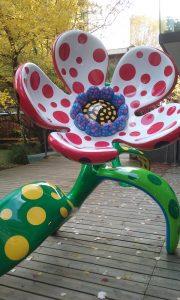 A daring exhibition of Yayoi Kusama’s work at Victoria Miro Art Gallery. The title itself plays on the double meaning of the word ‘moving’ evoking emotions and the movement of her repeated polka-dots that dance in the eyes of the viewer producing unsuspected depths and continuous motion on the apparently flat surfaces.

The exhibition develops in four sections. On the first floor of the gallery the visitors are allowed about a minute entry into the Infinity Mirrored Room. It is a mesmerizing experience of multiplied spherical paper lanterns with polka-dot patterns in a mirrored dark room. The lights shift colours from green to red, yellow, deep blue and bright pink communicating an overwhelming and reassuringly pleasant effect in the infinite repetition of the same motifs in a controlled space. As the title remarks, the artist’s (and the viewer’s) heart can dance, or play, in an illusion of infinity inside an enclosed space wishing to go beyond the limited vision.

At the ground floor of the gallery, Kusama’s pumpkins are displayed in paintings and in the painted bronze sculpture versions. They are in three colours: green, yellow and red, with black dots. Other paintings in the same room reveal a closer attention to the details of the dots, reflecting motion and evolution. As Kusama said, pumpkins speak to her about ‘the joy of living. They are humble and amusing at the same time’, they are ‘humorous’ and have a ‘human-like quality’. However, her pumpkins do not look like ‘real’ pumpkins we find in nature, not only in the colour but also in the shape. They look perfect, an image of a pumpkin, an example that becomes ‘The Pumpkin’ for the viewer.

The polka-dot patterns repeat endlessly in a reassuring rhythm controlling and limiting the space and giving, at the same time, the illusion of infinity revealing a highly crafted painting technique. They give a sense of suspension (dot, dot, dot…), a controlled suspension (but controlled to what extend?), which seems to be her core message.

The abstract entities evoked in the titles of some of her works (e.g., eternal soul, the heart dancing into the universe, I want to go to heaven) reveal unidentified places open to infinity and yet controlled by the artist in the accumulation and repetition of the same shapes. The viewer cannot be but fascinated by the illusion created and mastered by her art, the depth and movement of dots’ paths on her creations.

Among the visitors, there were families with children who were flabbergasted by the ludic quality of Kusama’s work, reminiscent of theme parks and playgrounds. But there is much more in her work for an adult eye, with her constant allusion to the tension between the finite quality of being humans and their infinite aspirations.

Kusama had a traumatic childhood; she studied painting in Kyoto and moved to the US in the late 1950s until the early 1970s, when she moved back to Japan. She is not only a visual artist, she is also a writer and produces performances, happenings and installations. In 1977 she chose to live in a psychiatric hospital and admitted that ‘if it were not for art, I would have killed myself’. She has reported to feel her soul separated from the body and to have hallucinations that she recreated afterwards visually in her paintings in an attempt to decipher and control them. In spite of her old age, eighty-nine, which does not seem to weaken her creativity and skill, she is extremely prolific; in fact, she is one of the world’s number one female artists. Her work has been described as a crossing between surrealism, minimalism, pop art and abstract expressionism. It certainly appeals to the public and has a primordial quality, translating her obsessions, which reflect the viewer’s obsessions, in an accessible language through self-assuring repetitions. She claimed that in her ‘nets’ of repeated patterns she meant to expand beyond herself in a self-obliterating process that allows her to access an imaginary unrestricted reality. What appeals the audience is also the sense of extreme freedom her work communicates, certainly a controlled kind of freedom but still beyond ordinary boundaries. In some way it reflects our free but surveilled society.

The exhibition continues into the beautiful gallery’s waterside garden, with the sculptures of the ‘Flowers that speak all about my heart given to the sky’. Nature and artifice merge in the constructed Arcadian scenery in the shadow of the cement and glass building of the gallery. A perfect match.

The last part of Kusama’s display, ‘My Eternal Soul Paintings’, is in Gallery II, third floor. They have a different philosophical and pictorial approach, large canvases with intriguing titles such as ‘A Corner of the Sky’, Beauty of Death’, ‘I Want to Eat the Sun’, or ‘Beyond the Heaven’. Large portions of bright colours and archetypical figures prevail on repeated patterns. Some of them look like primordial masks (‘Garden of Women in Blooming Youth’, ‘Let’s Stop the War’), others resemble organic elements (‘I spoke all about Peace’, ‘Hymn to Life’). The striking freedom of these works skilfully catches the eye of the viewers involving them in Kusama’s fantastical experience in an illusion of infinity where everything is possible, provided that it is also under control. Her work and her life shift between depersonalization and a solid grip to reality in a man’s world where she is leaving her indelible mark masterfully dottying around.