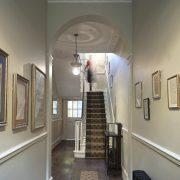 In Bleak House, the rag and bottle merchant and collector of papers Krook dies from spontaneous combustion.  In terms of dramatic appropriateness and poetic justice, it’s apposite, but Dickens’ belief such an event was possible earned him the scorn of those who saw themselves as more scientific.

The English essayist George Henry Lewes accused Dickens of being “completely outside philosophy, science and the higher literature”.

More than a century later, it is Dickens who is the more revered of the two, honoured by a series of museums in some of the many houses in which he lived.

The museum in Doughty Street, London, in a house where Dickens lived in the early years of his marriage, has a temporary exhibition to revisit the established view that Dickens had no truck with science, presenting the discipline not so surprisingly as an extension of his concern with social justice and reform rather than abstract theory.

A precursor to today’s television scientists, Dickens role was as a mass communicator and debunker of some of the more nefarious pseudo-scientists masquerading as the real thing.

He was a popularist with a gift for reaching across society and across age groups.  As a well-established stop on the London tourist trail, the Doughty Street museum has the additional challenge of communicating to all nationalities as well as to all generations and the risk is everyone is left slightly unsatisfied: the children and visitors from afar are puzzled and the pedants scoff at interesting snippets that deny us a deeper, more coherent narrative.

We can touch an armchair in which Dickens sat, see a court suit and sword Dickens wore, wonder at the lectern from which he declaimed and at the desk where he wrote so prolifically – and for cult followers that may be ample.

The stand-out exhibit of the science exhibition is Pepper’s Ghost, a display of optical illusions created by chemist John Pepper, which uses angled glass to create ghostly figures, including some from Dickens’ novella “The Haunted Man”.

You can try it out by sitting in a booth and terrifying your friends.  Dickens and Pepper had the higher aim of exposing the fraudulent spiritualists who used such equipment at seances.

Scientific or not, no-one could deny that Dickens was dedicated to describing ill-health and helping to combat it, devoting some of his restless energy to a campaign for the world’s first children’s hospital – a few blocks away from his Doughty Street home at Great Ormond Street.

We also learn that, like other writers whose description is based on acute observation, he has led to some retrospective diagnosis.  Obesity Hypoventilation Syndrome, a condition related to sleep apnea, was first called Pickwickian Syndrome because the Pickwick Papers – written while Dickens was at Doughty Street – feature a character with classic symptoms: Joe, “a wonderfully fat boy,” is constantly hungry, red in the face and always falling asleep.

Also characteristic of his profession, Dickens was as capable of ruthlessness as of compassion.  His work to improve conditions for broader society was matched by cruelty to his wife Catherine Hogarth whom he married when he was 24 and with whom he had 10 children.

The museum’s artefacts include Catherine’s engagement ring and document Dickens’ decision to make a public announcement of his separation from her as he pursued his affair with the young actress Nelly Ternan.  For Catherine that was humiliation.  In Dickens’ mitigation, the pressure of his fame and public speculation arguably forced his hand to tell the world.  The museum doesn’t get into the underlying ethics.

Ternan added to Dickens’ considerable expenses as he set her up as his mistress in a series of houses on the outskirts of London.

Money was a particularly powerful driver for Dickens, spurred by bitter memories of his father’s imprisonment for debt in the Marshalsea.

We’re reminded of how far he rose by a prison grill installed in the attic rooms, which in Dickens’ time were reserved for his servants and a nursery for the three of the 10 children already in the family when he lived in Doughty Street.

The basement might be more prison-like, but there we have a Victorian kitchen – complete with a hedgehog to keep down the insects – and a wine cellar to cater for the elegant dinner parties as Dickens cemented his fame and fortune.  We leave with the sense we have barely begun to know the man behind it all. 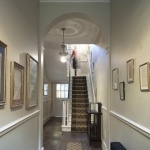