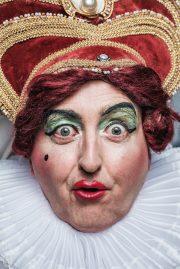 Low-tech, unforced and innocent, the Chipping Norton panto lives up to the programme note’s promise to provide “an escape from the disposable pop culture that surrounds our children”.

The formula is the timeless one of groan-worthy jokes, cross-dressing and occasional political references, just in case we need jolting back to reality.

Where writer Andrew Pollard is modestly original is in giving us a genuinely male principal boy and in tweaking the wicked fairy’s spell to deliver a 400 year-sleep that allows the action to extend from the roses of Tudor times to the flower-power 60s.

Under John Terry’s relaxed direction, the production gently builds from the mildly amusing to the laugh-aloud comedy of a second half crammed with a late burst of plot intrigue.

In the process, it creates a tolerant world in which the impossible is accepted as possible, naming one character Fanny and another Willy barely raises an eyebrow and the weakness of the male roles is the point rather than a theatrical defect as all the strength is bestowed on the women or on those who dress as women, while evil doesn’t stand a chance.

At the centre, the aptly named in real life Lucy Penrose takes on the part of Princess Rose, who may be royal, but is blessed with spirit, adventurousness and northern vowels.

She must have drawn her forcefulness from her late mother, rather than her mild father King Lenny VIII (Paul Tonkin), a helpless single parent, struggling to change a nappy.

Help is at hand in the form of super Nanny Fanny (Eamonn Fleming), who regales us with slapstick and ever more extravagant outfits that camouflage a tender emotional core.

As the tension mounts in a second half that has sprung us into the 60s, the Belladonna Bindweed Corporation – BBC for short – is an evil empire striving for world domination and to steal Rose’s prince charming: Jagger Prince, an unsuspecting, pseudo Liverpudlian stripling played by Connor Bannister.

In one of the best realised scenes, a heroic rescue is viewed through the screen of a malfunctioning 60s TV set.

Another comedy classic is a three-in-a-bed squeeze featuring Nanny Fanny, King Lenny and Willy Wallflower, played by Christian James as the dogsbody, benignly content to be everyone’s amiable friend in this happy, inclusive world.