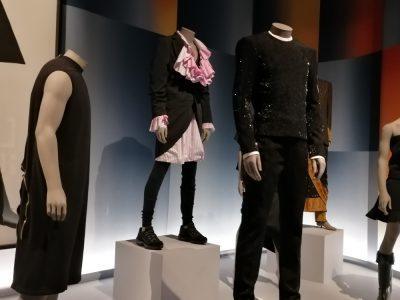 Fashioning Masculinities: The Art of Menswear

A fluidity that looks for alternative concepts of masculinity that trespasses traditional roles and expresses the possibilities of the individual is the main focus of the V&A exhibition.  The enthralling display of fashion, sculptures, pictures and films open the masculine to the feminine and beyond, creating unexpected connections that subvert stereotypes.  The exhibition is in partnership with Gucci, whose creative director, Alessandro Michele, remarks on how ideals of virility and traditional masculine roles do not take into account vulnerability and dependence, normally associated with the feminine.  Gender norms should be fluid rather than rigid in order to leave space in which change and transformation are vital for individual development and wellbeing.  The societal stereotypes that mould people from birth are considered toxic and violent; they produce victims and nourish abuse, according to Michele.  Fashion provides liberation, allowing the expression of the self out of the box of social conventions and imposed roles.  People define themselves through their clothes, showing their dreams, their individuality and personality in a flexibility that allows changes, new possibilities and further developments.

What men have worn and what they wear now are scrutinised in the exhibition, not in chronological order but by following specific paths that lead the viewer through the aesthetic and ironic contradictions and constrictions of menswear.  The four sections, undressed, overdressed, redressed and finally dressed, aim to be a guide to the complexities of men’s fashion, pointing out how often the borders between the masculine and the feminine have been blurred in the past as well as today.  This desire to express the self in a gender-free way, choosing who you are by using your clothes in a free, liberating way, is therefore not completely new.  The objects on display mainly focus on famous brands, such as Calvin Klein, Armani and Dolce & Gabbana, or on aristocrats’ garments, as in the portraits of Prince Alessandro Farnese, Charles Coote, 1st Earl of Bellomont, and Dudley, 3rd Baron North, and wealthy merchants or celebrities, who could and can afford beautiful and extravagant outfits.  They look like works of art because of the preciousness of the materials and the innovation of the models.  We do not know what ordinary people used to wear at the same point in time – probably faded trousers and blouses and today mainly jeans and T-shirts.  The incredible display of stylish outfits, sculptures, films and pictures are intended to rewrite the idea of masculinity by opening it up to the pluralities of ‘masculinities’.

The idealised forms of the perfect Greek male body of the Apollo Belvedere (120–140 AD), Farnese Hermes (4th century BC) and Borghese Gladiator (100 BC) are reflected in the silhouette of Jean-Paul Gautier’s jacket from his Trompe L’Œil collection; the striped jacket moulds the form of a naked body.  In a similar way, the man-shaping underwear by Sarah Blakely made of Lycra and elastane or spandex aims to shape the male body as well, just like women’s corsets and girdles did in the past.  Among the curiosities of the underdressed section, there is a jockstrap and swimming trunks with a fig leaf on them by Vivien Westwood.  A video with handsome dancers wearing white vests, long johns and trunks and mimicking classical sculptures ironises the artificial poses and plays with the idealisation of the male body connected to the underwear business and to commercials.

Cassil’s video on Tiresias emphasises transformation and introduces the second section, overdressed, featuring the luxurious outfits of aristocrats such as a Renaissance breastplate in which the engravings look like embroideries and the lace collars and cuffs of the marble bust of Gian Lorenzo Bernini and in the famous portrait of Prince Alessandro Farnese by Sofonisba Anguissola (1560).  The short cape is richly embroidered in gold and has been recreated in Gianni Versace’s filigree black cape.  Past and present merge in the transgressive use of the colour pink, traditionally associated with girls.  Joshua Reynold’s portrait of Charles Coote, 1st Earl of Bellemont, wearing a bright pink long overflowing cape, a feathered hat and pink slippers aims to show his wealth and power, but today we interpret it as artifice and exaggeration, as Susan Sontag remarks in Notes on Camp.  Artificiality and aestheticism are to the fore as well as a wish to express desires and erotic impulses in an artistic way.  It is a new sensibility in which the natural is undermined and the borders between the masculine and the feminine are indistinct.  Camp is chic and sophisticated; it is an aesthetic experience and it is ‘too much’.  In this perspective, menswear and womenswear influence each other, reinventing roles.

However, everything seems to change in the 18th and 19th centuries after the French Revolution.  The section redressed emphasises the sober qualities of the male outfits in these periods.  Rationality ruled and more practical and durable clothes substituted silk and lace.  Tweed, wool, knitwear and leather jackets, and, above all, uniforms and suits become the preferred outfits of the rising wealthy middle class.  ‘Men in Black’ of the mid 19th century seemed to dress for a funeral every day, though the different garments featured subtle varieties.  They looked like anonymous figures, as in Michelangelo Pistoletto’s ‘Standing Man’ (1962), featuring a man wearing a conventional dark suit seen from the back.

Designers tried to reinvent evening dress for men; this process is seen in the last section of the exhibition, dressed, a sort of glamourous happy ending but only for the élite.  The three marvellous outfits in the last room are not only fashion artworks but were also worn for special occasions by celebrities.  The black tuxedo gown was worn by Billy Porter for the Academy Awards red carpet in 2019; the ball gown by Gucci was on the cover of American Vogue in December 2020; and the bridal dress was worn by the drag queen Bimini Bou-Boulash in the second series of Ru-Paul’s Drag Race in 2021.  They are exclusive dresses for exclusive people that inspire a possible change in the future when fashion is genderless; they convey a sense of liberation, of being yourself without any fears.  It is cross-dressing with style, transgressive and creative beyond any limits, and a vision that will expand, revitalising our way of thinking about and experiencing reality.