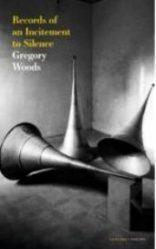 Poetry review – RECORDS OF AN INCITEMENT TO SILENCE: Chris Beckett experiences multiple responses to the poetry of Gregory Woods

This is one of my favourite poetry books of 2021. It surprises, moves and charms the pants off you all at the same time, due to its totally fresh style and vision. Its freshness echoes with the sounds and sensualities of Cavafy, Whitman, Gunn, even D.H.Lawrence perhaps. It is full of dogs (or rather one dog, a very characterful she-dog…) and loneliness, but also with the urgency of desire and sex.

I have to admit that I’m a bit biased, in that I first met Woods at the 2014 Ledbury Festival where we both appeared on a panel discussion called 50 Shades of Gay. I immediately liked him and his poems, but also felt very honoured to be there, since Woods is the leading British critic and historian of gay literature and the first Professor of Gay & Lesbian Studies in the UK, at Nottingham Trent University, where he is still Professor Emeritus. He has also published six collections of poetry and been praised to the rafters by Stephen Spender and Thom Gunn, amongst many others.

Woods’ previous books showed off his enviable skill with form, coupled with erudition and a playfulness and humour that are all his own. But what he does in this collection feels completely new to me: he pares the poetics down to two freshly invented forms. One is a discursive, free-wheeling but quite strictly syllabic longer poem, and this is juxtaposed with a ‘skinny’ iambic sonnet in unrhymed trimeter. There are only three of the long poems, starting with the eponymous “Records of an Incitement to Silence”, moving to “Hat Reef Loud” and lastly “No Title Yet” near the close of the book; they take us on journeys with the poet (and sometimes his dog). Meanwhile the skinny sonnets give us brief snapshots of a place and feeling, or a person, body, action, described with such precision that they glow. Take this for example:

That word ‘sputter’ to describe the man’s soft belly hair is tender and delightful. But as well as paring down the poetics, Woods has narrowed the scope of his attention in this book to focus on a lost love, an abandonment which haunts him, leaves him searching, lonely, restless. In the long title poem, he wakes in the night and jots down:

This haunting phrase with its inverted repetition recurs in an evocative sonnet called “City of Love”. Many of the poems take us to warm countries, gay beaches, barber shops, bath houses; they also talk of gods, heroes, helmets. All this reminds me of Cavafy with his anecdotes of homosexual love and classical mythology. A favourite poem, just called “Wow”, makes me think specifically of Cavafy’s “One of their gods”, while others delightfully evoke Frank O’Hara (“Up”) and Walt Whitman:

But I also love the struggle in these poems, that the normal surrender to silence – and by extension to disappointment and aging – is here transformed into an ‘incitement’: the silence of an absent lover, perhaps, or of something written but unvoiced, like a poem, is as subversive as a riot, a hand grenade. The book cover, with its three Trumpets of Judgement by a founder of the arte povera movement, Michelangelo Pistoletto, conjures up the blast of trumpets signalling the end of the world in Chapter 8 of the Book of Revelation; but in the picture they are lying around unused, unsounded, waiting to announce the ‘crack of doom’. The poet’s beard may now be ‘white and stiff with rime’ (“Records of an Incitement to Silence”) but he is still sharp enough to play with homophones. The struggle of sound vs silence, love vs desertion perhaps reaches its height in “Hat Reef Loud”, whose jagged 15/10/5 syllable lines seem to me to encapsulate Woods’ simultaneously fluent but agonised meditation on the ways in which we differ from dogs, for example

This is a collection that I will be dipping into, pondering, enjoying, and learning from, for a very long time to come.

Chris Beckett is a poet and translator, winner of the Poetry London Competition in 2001 and shortlisted for the Ted Hughes Award in 2015. He has two collections from Carcanet, Ethiopia Boy (2013) and Tenderfoot (2020), plus the first ever anthology of Ethiopian Amharic poetry in English, Songs We Learn from Trees, which he translated and edited with Alemu Tebeje. He is a host of the long-standing Shuffle reading series and a proud trustee of the Poetry Society.