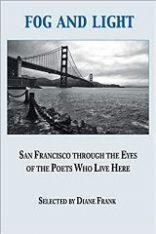 As the back cover copy proclaims, this anthology is a love letter to San Francisco by over five dozen poets who live or have lived in the fabled city by the sea. Certain landmarks and characteristics are familiar even to those who have never been to San Francisco, Golden Gate Bridge, earthquakes, the fog, Lawrence Ferlinghetti and City Lights among them, but here all viewed up close and personal.

Ferlinghetti, indeed, who died at the age of 101 early in 2021, feels like the guiding spirit of the collection. His poem, “Dog,” the city from a dog’s point of view (“Chickens in Chinatown windows,” “dead cows hung up whole / in front of the San Francisco Meat Market”), opens the collection. He appears again and again in the poems (Katherine Hastings’ “The Dawn is a Mirror of Myself,” Robin Lims’ “I Made a Chicken Adobo for Lawrence Ferlinghetti,” Karen Poppy’s “Marina Safeway, San Francisco”), as does his iconic North Beach City Lights bookstore (Stephen Kessler’s “North Beach Night,” Ellaraine Lockie’s “Words Take Wing,” Alice Elizabeth Rogoff’s “Windows”).

Amy Smith’s “Ode to the L Owl” is one of my favorites. Smith, a geographer who studies transportation and cites and has lived in San Francisco for almost a decade, writes about the “rhythms / of the nocturnal commute,” the all-night city bus that she catches before dawn,

We also meet the Chinese man at Van Ness, the “exasperated woman / with the serrated knife in hand” at 5th Street and Powell, the slumbering woman whose inner alarm wakes her at 3rd Street and Kearny.

Similarly, in “Mahler on Race Day,” Diane Frank describes a trip on the N-Judah streetcar “to play Mahler’s Second Symphony” at a venue eight miles away. The trip is “a marathon up and down San Francisco hills / from the Bay Bridge to the Pacific Ocean.” At Van Ness they leave the streetcar and go to the Herbst Theater for the performance. You almost feel exhausted just reading about getting there, but

In another poem, “Earthquake, 5 A.M.,” Frank describes waking to a sudden tremor, another well-known aspect of San Francisco. Robert Scotellaro does, too, in “After the Earthquake,” listening to the news on a child’s radio during the resulting blackout, “tuning in disaster with a twist of a bulbous red nose.” Scotellaro’s pieces also include “Bookends,” a hilarious story about an accidental encounter with a gang member and his two pit bulls on the gang’s turf! The narrator is able to finesse his way out of harm by pointing out the nuanced shade of his outfit, a cross between “Sassy Green and Kryptonite Green.” The gang member calls his dogs off!

Immigration is a potent recurring theme throughout this collection, as in Claudia Cole Bluhm’s “Liberty Street” (Jews, Puerto Ricans, Irish, French, Czechoslovakian, Russian…). “We are a nation of immigrants,” she writes, “And as difficult as my childhood may have been at times, I miss the tapestry of Liberty Street….” Kathryn Santana Goldman’s “Third Street Cowboys” begins, “I grew up in the San Francisco of Immigrants.” Jack Hirschman’s “The Columbus Hotel Arcane” continues the theme.

Chinatown! We’ve already seen Ferlinghetti mention it in “Dog.” It shows up elsewhere as well, in Gwynn O’Gara’s “Magic from Chinatown” and Meg Pokrass’s heartbreaking but funny piece about a blind date gone creepy, “Rice Paper and Luck.”

The fog certainly gets its due throughout as well, and not just in the book title. Alison Luterman’s “Fog,” Susie Meserve’s poem also entitled “Fog,” Joan Gelfand’s “The Summer I Stopped Resisting and Learned to Love the Fog,” Mathew M. Monte’s “The Mist is Settling on Everything,” Vince Gotera’s “Doggie Diner, Geary and Arguello, 1969” and others all highlight the famous San Francisco fog.

For those of us of a certain age, the “Summer of Love,” 1967, still resonates, and there are poems here that evoke that time, including Lucille Lang Day’s “710 Ashbury, 1967,” the dwelling of Jerry Garcia and the Grateful Dead, Lynne Barnes’ “Kaliflower Commune” and Robin Lynne’s “Haight and Ashbury.”

Fog and Light: San Francisco through the Eyes of the Poets Who Live Here is a real smorgasbord of San Franciscan scenery, energy and art. Harvey Milk, Castro Street, the San Francisco Symphony, San Francisco Giants Stadium and Candlestick Park – Orlando Cepeda and Willie Mays! – all appear in these pages. It’s been almost fifty years since I was in San Francisco, but it all comes back vividly in these poems.